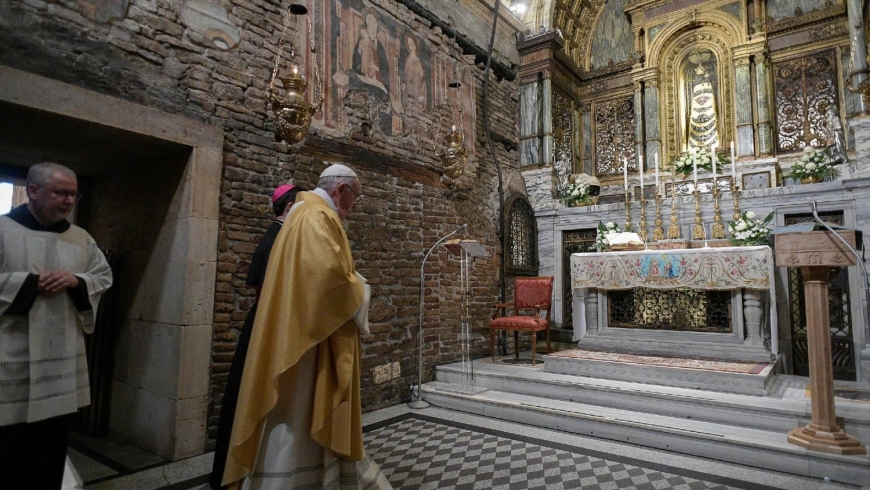 The Pope grants Loreto Jubilee for all air travelers

The Shrine of the Holy House of Loreto is entrusted to the care of the Capuchin Friars Minor. For some years now, the fraternity residing there has depended directly on the General Minister. We therefore wish to inform the confreres of an event concerning the sacred place which has been entrusted to us.

The Pope has granted a jubilee for all pilgrims who travel to Loreto by air. The jubilee was announced by Archbishop Fabio Dal Cin, Pontifical delegate of Loreto. On December 8 2019, Cardinal Pietro Parolin will preside at the celebration of the opening of the Holy Door in Loreto.

On the morning of June 21, at the pontifical museum of the Holy House of Loreto, the ceremony took place, which authorized a technical agreement between the pontifical delegation for the Shrine of the Holy House and the Italian Air Force, finalizing the coordination and promotion of events for 2020, the centenary year of the proclamation of Our Lady of Loreto as patron of air travelers.

Archbishop Dal Cin, Pontifical Delegate of Loreto, presided at the ceremony together with Col. Davide Salerno Commander of the Aviation English Training Center of Loreto. Using the same fountain pen used by Pope Francis when he signed the first copy of the Apostolic Exhortation Christus vivit last March 25th at the Holy House, they both signed the technical agreement.

Present were the regional councilor for culture and tourism, Moreno Pieroni, the mayor of Loreto Paolo Niccoletti, and representatives of the Air Force association of the Marche region and the Air Club of Ancona. Archbishop Dal Cin declared, “The Holy Father has granted the Loreto Jubilee for all air travelers, military and civilian, and for those who will arrive as pilgrims to the Shrine of the Holy House from every part of the world.”

“We thank Pope Francis for this great gift of the Jubilee” added the Archbishop, “which will open on December 8, 2019, the Solemnity of the Immaculate Conception. On this occasion, Cardinal Pietro Parolin, Secretary of State for the Vatican, will preside at the celebration of the opening of the Holy Door of the Jubilee, which will conclude on December 10, 2020. A plenary indulgence for the Jubilee Year will be granted to the faithful who pass through the Holy Door while asking for the gift of conversion to God and for the reviving of one’s filial devotion to Our Lady, who protects us during air travel. ‘The iconic image of the Holy House in flight with Mary” concluded Archbishop Dal Cin, “will help us to live the grace of the Jubilee spiritually by building together a great world-wide house for the glory of God and the unity of all people.”