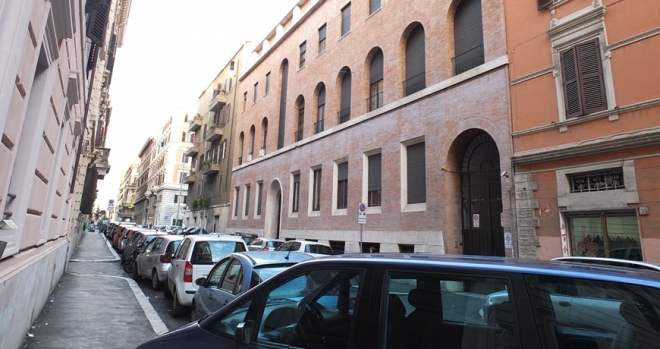 The Friary of Via Cairoli - also called “Friary of St. Fidelis in Urbe” and “Guesthouse” – was set up as a guest house in 1978 by the then General Minister, Br. Pascal Rywalski and his Definitory. From the beginning management has been undertaken by the Province of Milan. Its purpose is described in these terms in the agreement signed with the province: “The house is a dependency of the General Curia for all purposes and exists principally to offer hospitality to all the friars visiting Rome.” Since then, hospitality has also been extended to close relatives of the friars of the General Curia, to priests, religious and relatives of the resident fraternity of the International College.

It is important to note: This is a "Guesthouse" ONLY for THE CAPUCHINS. It is not open to the public.

The house is conveniently located close to Termini Station. It is equipped with a chapel, refectory and adjacent kitchen, reading rooms, a conference room, interior garden and about thirty bedrooms, a few of which are occupied by members of the fraternity and the rest at the disposal of guests.

Last modified on Monday, 30 December 2019 16:55
More in this category: « The friary in Jerusalem The Capuchin Friary at Frascati »