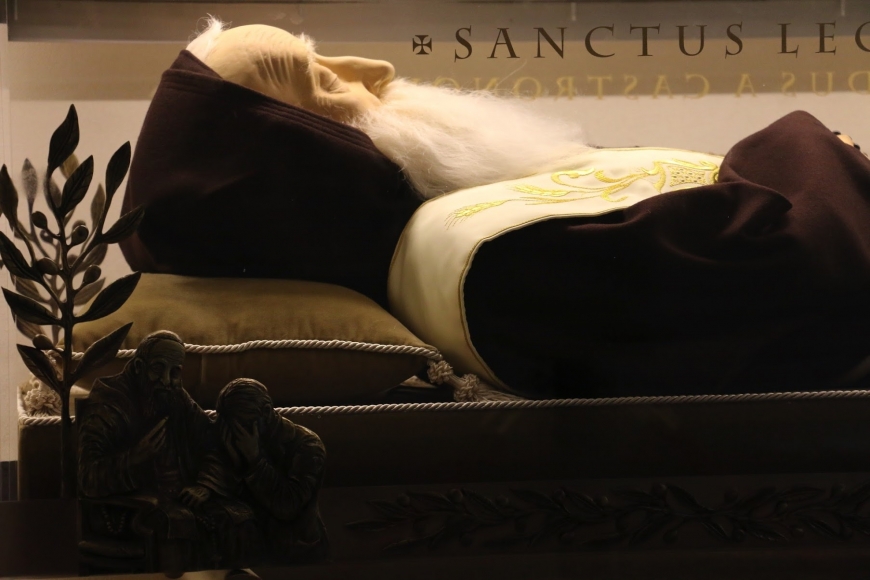 Rome. The main topic at the 72nd General Assembly of the Italian Bishops’ Conference (CEI), which was held at the Vatican from November 12 to 15, was the “comprehensive approval of the third typical edition Roman Missal in Italian.” (In the media much of the attention was on the new translation of the Our Father.) The Conference also decided to “establish two patron saints. The first is St. Leopold Mandić as patron of those sick with cancer. Since the 1980s, many doctors and sufferers and their families have made known their wish to be able to invoke the saint in special way for this illness – cancer – that in our time is ever more widespread and distressing. Those promoting the request had the support of many of the faithful [the petition had 67 thousand signatures. – ed.] and highlighted how St. Leopold – who himself suffered much from this illness, facing it with peace and a spirit of trust and abandonment to divine goodness – could be a good example for those suffering cancer’s trials and an intercessor with God for the gift of healing.” As has been noted, St. Leopold suffered much from delicate health, which was also the cause of his short stature (it seems he was no taller an 1.35 m) as well as a speech impediment. We know that in April 1942 he was recovering in the civil hospital of Padua, where he had been diagnosed with a tumor of the esophagus. “If the Lord wants me, let him take me,” he said, adding a wish: “Let the Lord take me with my sandals on.” For, as he said, “a priest should die in his apostolic efforts; there is no other death worthy of a priest.”

For those not acquainted with him, St. Leopold (1866-1942) was a Capuchin friar from Dalmatia. As a religious, however, he belonged to the Province of Venice. There, from 1909 until he died, he ministered mercy from a tiny cell, drawing to his confessional great numbers of people seeking God’s pardon. He was called ‘Padua’s confessor.’ He had wanted to be a missionary to his Croatian brothers, but Providence did not permit it, and he became instead a missionary of the confessional. His penitents, according to Br. Carlo Calloni, General Postulator of the Capuchin Order, emphasized his “singular welcome, incredible patience, unflappable tact, great sense of understanding, noble bearing even with the poorest and humblest, his big heart, and his great humanity in listening.”

The second request before the CEI was for St. Rose of Viterbo and she was declared “patroness of Franciscan Youth in Italy. She herself was a young laywoman, very close to the ideals of St. Francis of Assisi, who died in 1251. Today she is proposed as a model of gospel living to be followed in the journey marked out by Francis and Clare of Assisi and a support for a coherent and courageous Christian life.”

Given the decision of the CEI there remains only the final step, which is the official seal of the Congregation for Divine Worship at the Holy See.

We invite you to make a virtual pilgrimage to the places of St. Leopold: Padua and Herceg Novi (Castelnuovo), Montenegro.

More in this category: « Kenya: Seeds of peace between Christians and Muslims in Garissa A Direct Line »