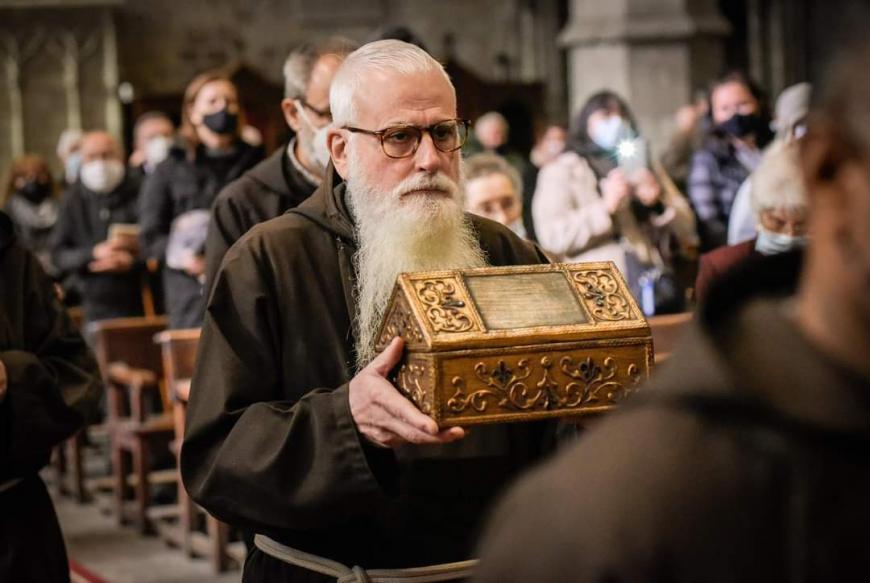 The PDF version contains a special page format for printing. 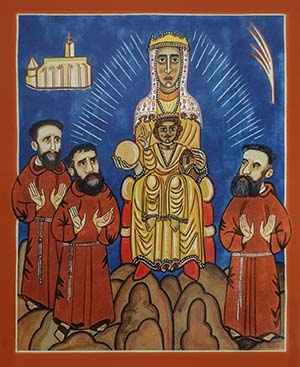 Letter of the Minister General
on the occasion of the beatification

To All the Brothers of the Order
Their Locations

On Saturday, November 6, 2021, in Manresa, Catalonia in the beautiful basilica of Santa Maria de Seu, where the Madonna of Monserrat dominates the main altar, three Capuchin friars who were killed in odium fidei during the ferocious persecution that occurred in Spain in the nineteen-thirties were beatified. These brothers are Br. Benet of Santa Coloma de Gramenet, Br. Josep Oriol of Barcelona and Br. Domènec from Sant Pere de Ruidebitllets. They thus join the Capuchins already beatified in 2001, 2013 and 2015. Together they total 72 Spanish Capuchin martyrs, who shed their blood for their Catholic faith.

Br. Benet, Br. Josep and Br. Domènec were the first to experience the brutality of persecution. Just two days after the closing of the Provincial Chapter of Catalonia, on July 20, 1936, they were forced to leave the Manresa friary and seek refuge with family and friends. The friary and church were immediately set afire and razed to the ground, while days later, these brothers were arrested, tortured, massacred and killed without any trial.

Called to profess their faith in Christ to the point of bloodshed, Br. Benet, Br. Josep and Br. Domènec went back to demonstrate that Christian strength lies in meekness and that violence is overcome with love and forgiveness. A powerful lesson and a perennial example that encourages us never to doubt the goodness of God and his providence. In every situation he knows how to give his disciples certain hope, and at the same time a clear awareness that in the end it is not hatred but love that wins.

Briefly, I’d like to touch upon some highlights from their lives.

Blessed Benet (born Josep Domènech i Bonet) was born in the village of Santa Coloma de Gramenet on September 6, 1892, to a humble and deeply Catholic peasant family. He was baptized on September 11, 1892 and made his first communion on May 30, 1903.

Sensing the call to the priesthood, in 1903 he entered the minor seminary of Barcelona. After a few years, he more clearly understood the calling to the religious life; on February 18, 1909, he was invested with the Capuchin habit at the novitiate of Arenys de Mar in the Province of Barcelona and on February 20, 1910, he made his first profession. He solemnly professed in the friary of Sarriá (Barcelona) on February 23, 1913 and was ordained a priest on May 29, 1915.

His spent most of his religious life between the two formation houses of Igualada and Manresa, while also engaging in preaching ministry. On August 6, 1936, he was captured by the militiamen. They wanted him to blaspheme, but he refused. They then took him to a place near Manresa called La Culla, where he was killed.

Blessed Josep Oriol of Barcelona (born Jaume Barjau Martì) was born in Barcelona on July 25, 1891. The family was very Christian and wealthy. He was baptized on July 28, 1891, and on June 7, 1892, he received the sacrament of confirmation. He made his first communion at the age of nine. At the instigation of his brother, he entered the seminary of Barcelona but, not having passed the first-year exams, he tried to learn a trade. Strongly attracted to the Capuchin life, he entered the novitiate on October 21, 1906, and continued his formation first in the convent of Igualada and later in those of Olot and Sarriá in Barcelona. He solemnly professed on August 15, 1911 and was ordained a priest on May 29, 1915. He taught liturgy, Hebrew and ecclesiastical history in the theological school of Sarriá. In 1925 he was assigned to the friary of Manresa and there devoted himself to preaching, hearing confessions and giving spiritual direction.

On July 24, 1936, while he was bringing communion to a Poor Clare nun, he was identified and arrested by the militiamen. That same evening, he was taken out of Manresa and was shot to death.

Blessed Domènec da Sant Pere de Ruidebitllets (born Joan Romeu Canadell) was born on December 11, 1882 into a peasant family. He was baptized on December 17, 1882 and was confirmed on July 23, 1886. He spent his early school years in the village school, whose parish priest, seeing the seeds of his vocation, prepared him to enter the seminary of Barcelona. Having entered in 1897, he successfully completed his philosophical-theological studies and was ordained a priest on May 25, 1907. He was attracted, however, by Franciscan religious life and the following year, on October 3, 1908, he entered the Capuchin novitiate. He made his temporary profession on October 4, 1909, and his solemn profession on October 4, 1912. During that period of initial formation in the Capuchin life, he devoted himself fruitfully to preaching and to the sacrament of reconciliation. In 1913 he was sent as a missionary to Costa Rica and Nicaragua, returning to Catalonia in 1930. He was first assigned to the friary of Sarriá, then to Arenys de Mar and finally to Manresa.

On the night of July 27, 1936, while he was moving from one place to another for greater security, he was arrested, beaten and tortured and finally shot to death just outside Manresa.

Naturally, the entire Order unites itself with the friars of the Province of Catalonia in their joy and thanksgiving to the Lord for these three brothers, the new blessed. I am certain they have already earned us additional blessings from the Lord. But, at the same time, they pose for each of us – with their lives and their martyrdom more than with their words – an invitation to roll up our sleeves and respond generously and decisively to the call of God, prompted by the ever-changing social and ecclesial conditions of our current times as they’re being encountered in Spain, in Europe and in all places around the world where, by divine favor, the Lord grants us to be.

Everywhere, we are continually called to reinvigorate our charism as Capuchin friars, friars of the people and men of faith, and to make it relevant and meaningful again. Men who are brothers, capable of giving of themselves completely so that Christ may be proclaimed, known and followed in every place where conditions are difficult, challenging or even anti-Christian.

It was fidelity to both the Gospel of Jesus Christ and their own state of consecration that was fully embraced by Blesseds Benet, Josep Oriol and Domènec to the point of offering their lives; and this, in turn, made them clear examples of that seed that falls to good ground and bears much fruit … fruit that remains fertile and lasting … which gives light to man and brings true relish to all that exists.

We ask them to pray that this same fidelity be granted to each of us: that we might make a complete gift of ourselves in every situation by following in the footsteps of Our Lord Jesus Christ, crucified and risen – the only fidelity that actually makes us truly free as His witnesses … and joyful besides!

More in this category: « The newly available books