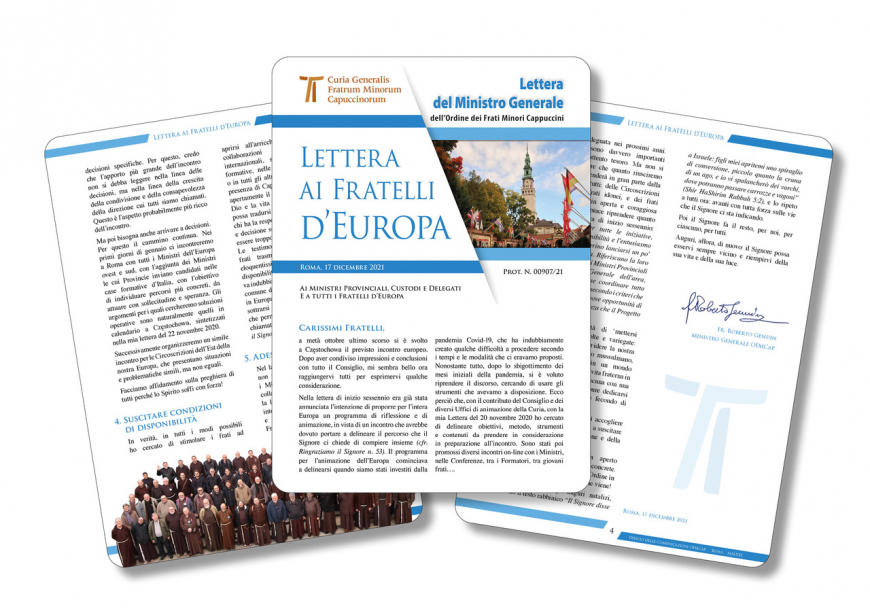 The PDF version contains a special page format for printing.

Letter to the Brothers of Europe

To the Provincial Ministers, Custodes and Delegates
and to All the Brothers of Europe

In the middle of last October, the highly anticipated European meeting took place in Częstochowa. After sharing my impressions and conclusions with the whole Council, it seems now opportune for me to address you all and express to you some considerations.

In my letter at the beginning of the sexennium, the intention was already announced to propose a course of deliberation and action for the whole of Europe and follow up with a meeting that should have led to a discernment of the path that the Lord asks of us (cf. Let Us Give Thanks to the Lord, No. 53). This agenda for the re-animation of Europe was beginning to take shape when we were hit by the Covid-19 pandemic, which undoubtedly created some difficulties in the proceedings. Despite this, after the dismay of the initial months of the pandemic, we wanted to resume the discussion and use whatever tools we had at our disposal. Hence, as articulated in my letter of November 20, 2020, the General Council and I with various other offices of the Curia aimed at specifying objectives, initiatives, strategies and other matters to be considered in preparation for the meeting. Various on-line meetings were then initiated with the ministers as well as among the conferences, formators and young friars.

Despite all our efforts, we must admit that we still came close to meeting in Częstochowa with several impediments due to the inevitable obstacles we encountered during the period of preparation. In particular, we got the impression that we were not successfully involving all of the friars. But that hurdle did not deter us from moving forward, and we managed well! I think the commissions that have worked so hard amid all the difficulties will be pleased - and I feel they should be thanked from the heart! All their efforts have truly yielded such a positive outcome.

Due to health issues, it was not possible for me to attend the meeting in person, but I was happy to have been able to follow along with most of the work through communications media.

The above heading, which I quote from one of the Councillors, seems to encapsulate well the friars’ overall experience in Częstochowa. From what I’ve seen and heard, it was a week of intense work and friendly discussion along with well-prepared and important contributions for reflection, all in an atmosphere of free exchange and Franciscan fraternity. Already, there have been several provincial newsletters that have covered the results of the gathering, and have unanimously applauded and underscored the importance of the work that was done.

For my part, I believe that it was a week of grace primarily because I saw the ministers and the friars happy to be able to meet again, to be able to reason together about the current situations and to be able to share efforts, perspectives, hopes and dreams .... I believe it was a providential week especially because it added another important step in our growth of awareness of the common responsibilities to which we are called as an Order in Europe, of the problems we must face, of the need to take action in a common direction.

Questions were posed from the issues discussed that may be a cause for anxiety, and it has become urgent to provide some concrete answers. But, to find the right answers, it will be necessary first to walk through it together. The meeting was a chance for us to rethink the structures of the Order in Europe, but it was mostly a means for stimulating the superiors into seeking together sufficient solutions to their various challenges. It seems it’s become very clear to everyone that fraternal collaboration between the circumscriptions, both in the area of formation – initial and ongoing – as well as in all other areas of our life, is something necessary. It is an important, concrete way of responding effectively to the challenges of our time, during which we see the Order significantly diminishing in this part of the world. This means that in collaboration, one cannot and should not take steps backwards, but quite the opposite! We will help one another, and we will respond harmoniously to the Lord's 'call' if we all strive to take this path decisively, in whatever guise it may take.

Many wonder what decisions have been made in Częstochowa. But the goal of the meeting was not to make specific decisions. So, I believe that the greatest contribution of the meeting should not be taken in light of decisions made, but in light of growth, sharing and awareness toward that direction to which we are all called. This is probably the richest aspect of the meeting.

But alas we must also arrive at decisions. And therefore, the journey continues. In the first days of January, we will meet in Rome with all the ministers of Western and Southern Europe, in addition to the ministers whose provinces send candidates to the formation houses in Italy, with the hopeful and solicitous intent of determining more specifically the paths that should be implemented. The matters from which we seek to draw our solutions, of course, are those that were already explored at Częstochowa and first suggested in my letter of November 22, 2020.

We will then organize a similar meeting for the Eastern European circumscriptions, which present similar but not equal situations and problems.

We will rely on everyone's prayer for the Spirit to rush in upon us with strength and power!

Truthfully, I have tried every possible way to stimulate friars into embracing the enriching adventure of interprovincial and international collaborations, whether it be for formation houses, for the St. Lawrence Fraternities or for any new locations that request our Capuchin presence in their midst (a clear testimony to the primary importance of both a relationship with God and fraternal life). For this to become a reality, it is necessary for those in charge to urgently and decisively make choices that will free the friars from being constrained by structures. The video testimonies of the young friars sent to Częstochowa are very eloquent: there is a desire and genuine willingness to give of oneself, no matter where one might come from! This must undoubtedly be seen as a thing of value as we continue in our collective aim of revitalizing our charism in Europe. The Ministers therefore should not evade their duty to put into place the conditions that allow 'going' for those who feel called 'by the Lord' (cf. Let Us Give Thanks to the Lord, No. 31).

A notable part of the work carried out in Częstochowa was the richness of meaningful input on the part of the ministers with the interest of ensuring collaborations will develop sufficiently over the next few years -- this includes collaborations already in progress as well as those anticipated to come, interprovincial or intercultural formation fraternities as well as new ones in the future, and the St. Lawrence Fraternities. These insights are very important and worthy of our attention. But we must never forget that the true key to our success will depend largely on universal availability – both in terms of circumscriptions freeing up suitable friars, and of individual friars who desire to offer themselves openly and courageously. I’d like to quote here once again from my first letter of the sexennium: “Naturally, for all of these initiatives, we ask the willingness and enthusiasm of the brothers who wish to throw themselves into this beautiful adventure. Let them make known their desire to their provincial ministers and the general councilor of their area. They will know how to coordinate everything and respond in the best way, according to the hope that each cultivates within himself and the new opportunities for growth and witness that the Project offers” (No. 34).

Indeed, the possible ways of 'making oneself available' are many and diverse: whether it be the prospect of sharing one’s life and values in the Muslim world, or of engaging oneself in a more orthodox setting, or witnessing fraternal life in intercultural fraternities, each with its own characteristics, or of dedicating one’s self to the field of formation (the most fruitful of all!!), or …

We should never be afraid to accept the invitation that the Lord continually raises in the secret depths of our own person and our vocation!

In recent years, the Order has truly opened up to many real possibilities, especially in terms of its presence in Europe; it’s a bit like opening a crack in the door for the Lord who comes!

I recently quoted in my Christmas Greeting an excerpt from the rabbinical texts, “The Lord said to Israel: My children, open to me a window of conversion as small as the eye of a needle, and I will open wide for you gaps where carriages and wagons can pass.” (Shir HaShirim Rabbah 5:2). So, let us take this to heart and forge ahead with all our strength along the paths that the Lord is showing us!

Then the Lord will do the rest … for each one of us, for us as a whole, and for all.

Again, I extend to you my warmest regards. May the Lord remain close to you always and fill you all with his life and his light.

More in this category: « Christmas Greetings Changes in the General Curia »