It has been a tradition that all the Indian Capuchin student friars gather together for a month-long preparation before making their Solemn profession. And the blessing here is that it also includes members from other Franciscan Families of India. This National level program has been organized for the past three years in the Blue-hills (Kotagiri) of Tamilnadu. This year there were 41 capuchins from 11 Capuchin Provinces. From other Franciscan families there were 2 Conventuals, 2 OFMs and 6 TOR joined the Capuchins making it an inter-franciscan process.

The 51 brothers began their inner journey on April 01, 2015 with the solemn high mass officiated by Rev. Br. Chinn Polisetti, the president of CCMSI. The animating team with Brs. Lawrence Soosai-Nathan (Province of Tamilnadu South), Wilson D'Souza (Province of Maharashtra) and Henry D'Souza (Province of Karnataka) accompanied the brothers in their inward journey. Brs. A.J. Mathew, the Secretary of CCMSI and Arockiam Savarimuthu, the provincial of Tamilnadu South Province encouraged the brothers by their presence. 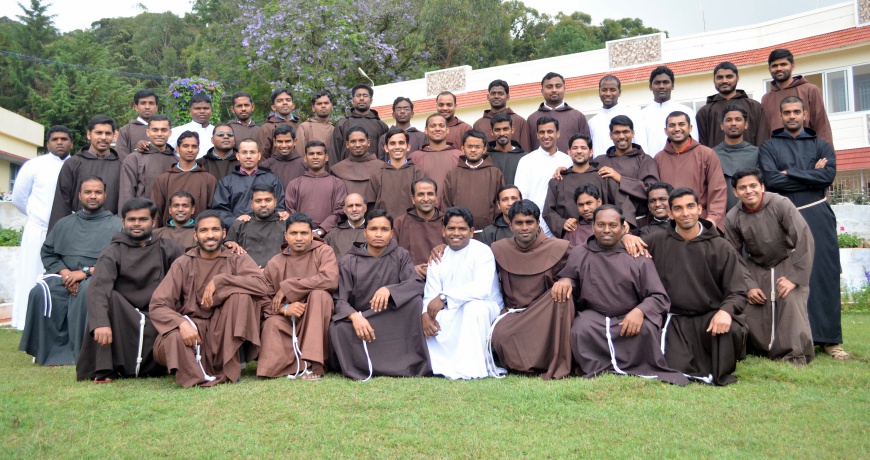 The various moments of classes, input sessions, group discussions, personal meetings, prayer services, Retreat, Games, Work, Fun activities and quite moments lead not only to a unique celebration of Franciscan brotherhood but also to a serious and meaningful inner journey. The visit of Br. Michael Fernandez, the General Councilor for India, in the last week added colour to this graceful event. On the whole, the program aims at preparing and renewing every brother not only in our yearning to be a friar but also in our dream to be a Francis.

Br. Mauro our General Minister and his council always encourage us to come together at the conference level having common study programmes and formation centres so that we are able to experience the universal brotherhood. It also enables us to have a good team of motivated formators to accompany our brothers. It is a long journey to convince our brothers of the Order to have common formation initiatives than secluding themselves in their provincialism. The time has come now that we have to stop wasting our energy and money in multiplying formation centres, instead start collaborating with one another at the conference level. We appreciate this common initiative of CCMSI and wish them to have many more initiatives of this sort!

Do you agree that joint interprovincial ventures in formation and other solidarity issues are inspirations of our time?

Altro in questa categoria: « You are Beautiful People…! Una benedizione …! »