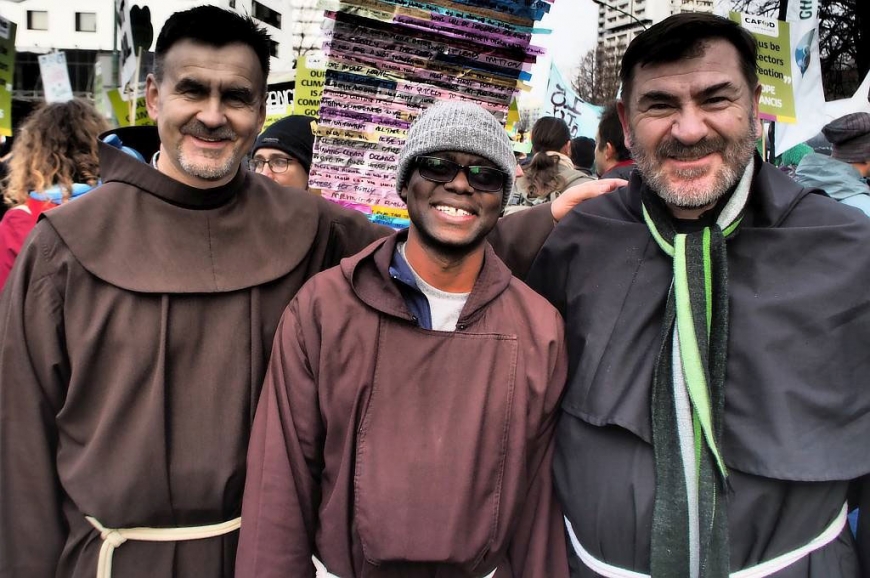 On December 3-15, 2018, the United Nations Climate Summit was held in Katowice, Poland. The event was attended by politicians, scientists and world leaders attempting to deal with the difficult, modern-day challenges caused by the current social and economic crises and ecological and climatic conditions.

Shortly before the Climate Summit (December1-4), workshops by the Ecological Movement of St. Francis of Assisi (REFA) took place in Katowice as well, at the School of Integral Ecologists. Eighteen participants prayed, worked together and grappled with the difficult challenges posed by the ecological and climatic crisis with the aim of creating  their own Christian response in the spirit of the Encyclical Laudato si’. “Looking in the same direction is what unites us,” the participants declared. “We want to be ecologists among Catholics and Catholics among ecologists.”

The tools for this mission were crafted through conferences, discussions and meetings with experts.

One important event was a Mass organized by REFA on December 2, for international reconciliation and the success of the climate summit negotiations. The Mass took place at the church used by the Fatebenefratelli lay society.

The next day, a Franciscan discussion took place on the topic “Climate Crisis and the Role of the Faith Community for Climate Justice.” It was organized by the OFM General Office for GPIC. Much attention was paid to the Christian response to the environmental crisis and the role of Christian communities in achieving climate justice. Eco-messages were delivered by Friar Jacek ORZECHOWSKI, OFM, from the USA; Friar Stanisław JAROMI, OFM Conv.; Junghee MIN, Secretary General of the ICE Network (Inter-religious Climate and Ecology), Budi TJAHJONO (Franciscans International) and Igor BASTOS (Global Catholic Climate Movement).

On December 8, many Catholic ecologists spent the day at the Franciscan Center of Upper Silesia in Katowice-Panewniki, Poland. Mass there was presided over by Friar Stanisław JAROMI, OFM Conv., and concelebrated by Friar Sergiusz BAŁDYGA, OFM, the guardian of the local friary where a charging station for electric cars was recently installed. The events that day combined lessons, discussions and prayer under the slogan: “Mission Laudato Si‘: Christians for the Climate.” Participants included representatives of GCCM, Franciscans International, REFA, the diocesan Caritas organization and local pastoral groups.

The Franciscan voice was clearly heard during the various scientific and ecumenical events.

Notable among these was the International Convention entitled “For the Care of a Common Home: The Christian on the Path of Ecology.” It was held on November 30, 2018, organized by the Faculty of Theology of the University of Silesia in Katowice. Next, there was a symposium entitled “Safeguarding Our Climate, Advancing Our Society.” It was held on December 10, 2018, organized by the Pontifical Academy of Sciences, the Polish Academy of Sciences and the French National Center for Scientific Research. Among those participating was the Most Reverend Wojciech POLAK, Primate of Poland. At the end, a joint memorandum was issued in which the scientists, intellectuals and clergy demanded an active and scientifically based response to limit global climate change.

Among the ecumenical activities was a discussion held on November 29, in the Silesian Library, in the context of ecumenical academia and interreligious dialogue, entitled, “Submit the Earth to Yourselves.” On December 4, Midday Prayer was recited in the Protestant Evangelical Cathedral of Katowice. The participants prayed for miners and ecologists. Next, there was an ecumenical pilgrimage for climatic justice which took place twice; once at the Vatican on October 4, on the feast of Saint Francis of Assisi, and again on December 7 (after 65 days) at Katowice. Among those participating was Friar Benedetto AYODI, OFMCap, a Kenyan from the Capuchin JPIC office in Rome. There was also a climate march held on December 8, again in Katowice, which was carried out by pilgrims, activists, ecologists and residents from Silesia. The three Franciscan orders were represented by Friar Jacek ORZECHOWSKI, OFM; Friar Benedict AYODI, OFM Cap.; and Friar Stanisław JAROMI, OFM Conv.  A “Letter of Christian Ecologists to the Participants in the Climate Summit” was written, and delivered by REFA, in which academics in ecology, ecological activists, the clergy and the laity together as Christians, addressed the participants at the Climate Summit, promising their support.

Dear participants and visitors of the climate summit,

You are about to spend 2 weeks in Poland, discussing important, difficult, and often controversial issues. It is our biggest hope that Polish hospitality helps you make the right decisions, so that our planet continues to be home to us all. Many believe that the upcoming years are going to be the most important ones in humanity’s presence on Earth. If it happens, a climate disaster is not going to be a long process; when the breaking point is reached, the world will just collapse suddenly. It is now that critical decisions must be made. Our world is in your hands. We believe that your knowledge, responsibility, and solidarity will present effective solutions.

Among Polish leaders, our bishops strongly and unequivocally stated on the day of Saint Francis of Assisi (4.10.2018): “We are aware that the climate is undergoing changes. Human activity has indubitably added to it. Growing production and consumption contributes to the enhanced greenhouse effect. Activities detrimental to our environment should be limited, and we should handle fossil fuels responsibly, develop renewable energy sources, and teach their economical use. This task lies mainly with those who have political and economic power, and those working in education.”

We are not people of power. We are Christians who work in various professions across Poland, but we do work as well towards an “ecological conversion” of modern economy, politics, and science.

We pray that the common good triumphs at the UN climate summit in Katowice and all the right decisions about our planet are made. We pray for the humility to accept scientific reports and the bravery to give up what needs to be given up in their light. We pray for imagination in the solutions we adopt. We also ask every Pole and every citizen of Earth to responsibly and jointly work to protect our climate, and thus to protect the life and health of people on Earth. It is our belief that every Christian – and every person of good will – can follow John Paul II’s and Francis call for an “ecological conversion”.

This is also what we would like to wish you: be humble about the difficult reality of the world, be brave in your decisions, and may those decisions consider all people in the world. May you hold dear especially those who live in poor and overexploited regions of our planet, and those who are beginning to experience the disastrous consequences of our current disregard for the planet.

There is only one world – our world and it is home to us all.