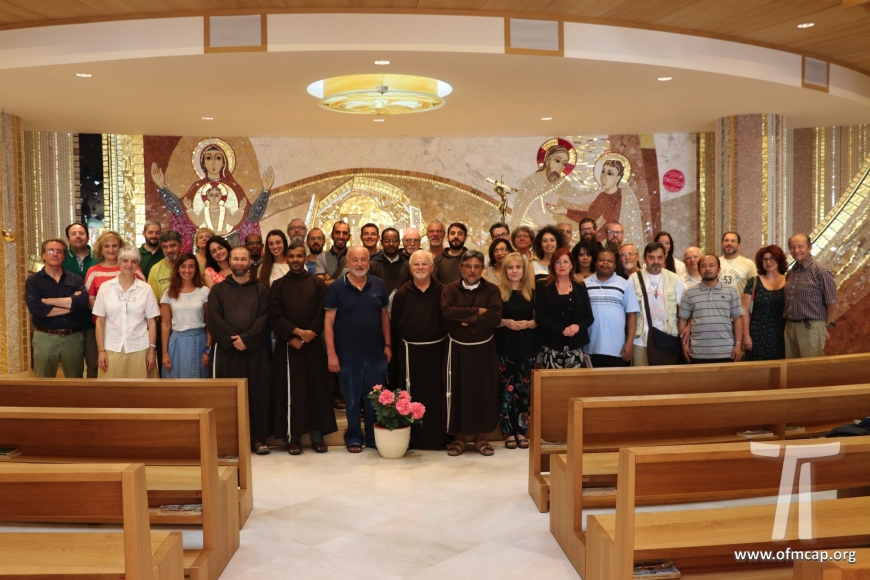 In this General Chapter year, the customary course for Capuchin librarians, archivists, and museum curators was held in Assisi, at the Domus Laetitiae, during the week of July 29 to August 4. There were about ten speakers and fifty-five participants, religious and laity, who work in our institutions of Capuchin cultural heritage. Taking advantage of the particular lure and meaning of Assisi, in addition to the normal reports and meetings there were also guided visits to the Basilica of Santa Maria Sopra Minerva and the Roman forum under the Piazza del Comune – which is very interesting but not very well known – as well as to the museum and archives of the cathedral of San Rufino and the Deruta ceramics museum.

Particularly appreciated were the deep bonds that we experienced between history, culture, and spirituality, especially in the celebrations at the Shrine of Renunciation, at which Br. Matteo Siro, Provincial Minister of Umbria presided, of the Pardon of Assisi, which was experienced at the Portiuncula in the presence of the General Minister of the OFM and the bishops of Gubbio and Spoleto, as well as the visit to the Lower Basilica of St. Francis in Assisi, guided by our own Br. Sidney Machado. Other topics that were treated included the origin of the Portiuncula indulgence, presented by Professor Stefano Brufani, the Franciscan commissioning of art between the Middle Ages and the Renaissance, presented by Professor Daniela Pera, the Ecclesiastical Archives Project, presented by Dr. Massimo Bonifazi, and the management of infestation emergencies by Dr. Davide Di Domenico.

The participants in the course were mostly Italian, but came also from Switzerland, Germany, Czech Republic, Portugal, Turkey, Ethiopia, Indonesia, and Brazil. There was also an opportunity to reflect together on the importance and implications of our service in the field of cultural heritage, formation, pastoral care, and Capuchin spirituality.

As usually, this was also the time to update the cumulative Capuchin library catalogue, especially in Franciscan studies, in which forty institutions currently participate. The catalogue has over a million records, and can be found online at www.ibisweb.it/bcc.

More in this category: « Concordes Spiritu Volabimus MEETING OF THE CAPUCHIN POOR CLARES OF CENTRAL EUROPE »