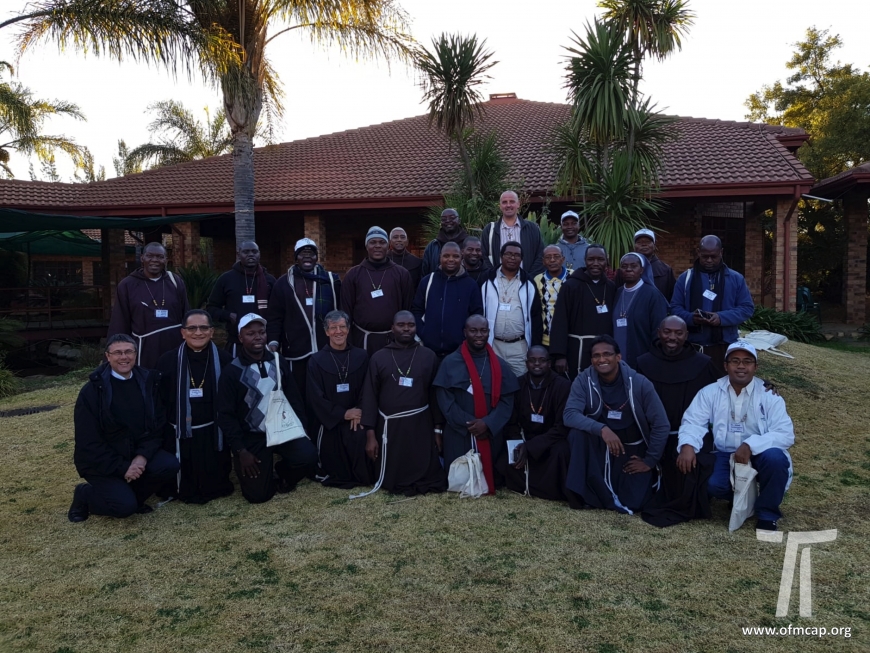 Pretoria, South Africa. “The OFS is at the service of reconciliation, peace, and social justice” was the theme of the first Pan-African Congress of the Secular Franciscan Order (OFS) and Franciscan Youth (YouFra) held in Pretoria, South Africa, from this past July 20 to 25. There were 116 participants, including twenty-four spiritual assistants from twenty-two countries of Africa and from the islands, who came for this first event for Africa at the continental level. Also present were eight members of the OFS International Council of the Presidency (CIOFS), including the OFS General Minister, Tibor Kauser, and all four General Assistants.

Among those invited was Most Rev. William Slattery, Archbishop of Pretoria, who also presided at the opening Mass. “Currently, the Church in Africa must face the great challenge of moving from catechism to evangelization in the light of the Africa munus, that is, from knowing and feeling,” the Archbishop remarked.

Br. Benedict Ayodi, OFM Cap. from the Office of the Capuchin General Curia for Justice, Peace, and the Integrity of Creation, presented the richness of Africa and the current situations of conflict, demonstrating with scientific data that the real causes of conflict lie in the struggle for power and money.

Br. Dominic Griego, OFM Cap., presented the Damietta Peace Initiative for the promotion of dialogue between persons in areas of tension and conflict. Nicholas Kugonza, OFS (Uganda) spoke on the future of young people. The couple Honorius and Ita Chilufya, OFS (Zambia) presented on the theme of family as a school of reconciliation, peace, and social justice. Nina Richard, OFS (South Africa) presented on certain initiatives in South Africa for the most needy.

Other topics presented by the members of the CIOFS Presidency and by the General Assistants included the OFS in particular, its current events, formation, the role of councils, etc. During the Congress, after the work days there were moments for cultural presentations, sharing, and fraternal fun.

The Congress had been in preparation for a long time, beginning in 2014 when then OFS General Minister Encarnita Pozo and her council decided to begin an Africa Project that included organizing such an event. The meeting itself was preceded by various regional congresses in both English and French, as well as formation courses for the promotion of the OFS and YouFra. These were opportunities for ongoing formation for members of the OFS and YouFra as well as for spiritual assistants. The satisfaction of the participants could be seen on their faces. In conclusion, the participants prepared a final message for all the fraternities of the continent. With God’s help, the next Congress will be in four or five years.

More in this category: « Franciscans are ‘One Family with a Focus on the Heart’ Concordes Spiritu Volabimus »