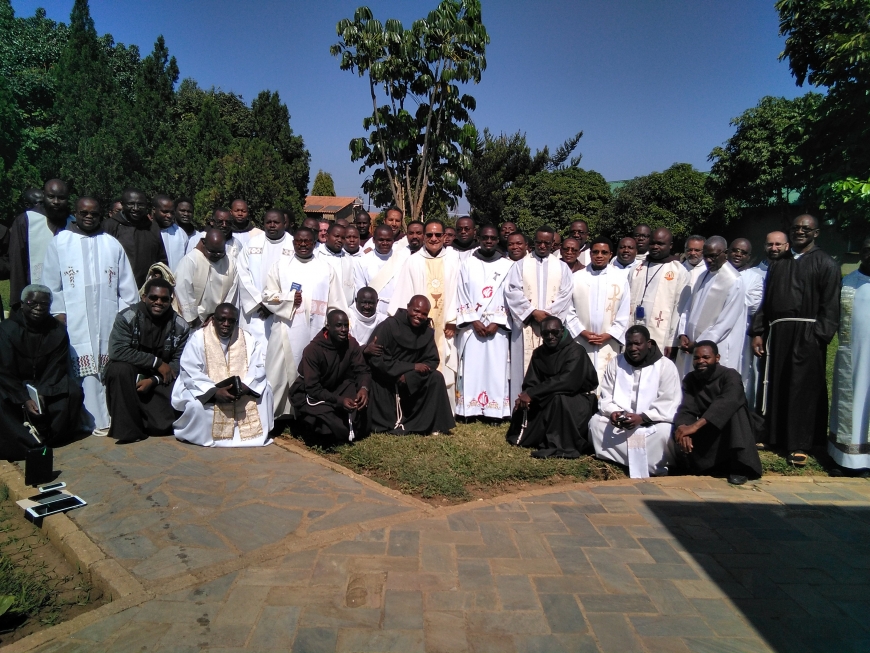 Inter-Franciscan School for Formators in Africa - 2018

Fifty-three formators from all the four branches were present, from the OFM Conv., OFM, Capuchins, and TOR. They came together to prepare themselves to discern and to tune themselves to be effective formators. The animators helped the brothers to train themselves to become passionately integrated persons. It helped them to know each other and experience Franciscan brotherhood.

At St. Bonaventure the three branches of the friars minor have been living and forming brothers since 1992, jointly attempting to form the student friars on the same campus. There are constant common activities while each group has its own respective simple dwelling. They come together for prayer, Mass, social work, and cultural activities apart from the studies done together at the College. Therefore this is indeed a very fitting place to inspire the formators on the value of joint fraternal formation.

The course was designed to have three parts, each running for two weeks. This year’s first part had inputs on the anthropological, psychological, Franciscan theological, and practical dimensions of formation. Every morning we had two inputs and in the afternoon there were group discussions based on the talks where formators had the opportunity to share their formative experiences and suggest ways to have integral spiritual formation.

The participants were from more than twenty African countries and so experienced the cultural richness, diversity, and common unity of Franciscan brotherhood. Listening to different languages began the moments of respecting one another’s uniqueness and an introduction to the Integral Optimistic Way. It was enriching to know each of the cultures and its richness. It is good to adjust to the need and diversity of other cultures. The brothers were united by the Franciscan will to do good in Jesus name.

A Day of prayer & Contemplation

On June 3 we had a day of recollection to strengthen ourselves through prayer and reflection. Br. Agustine OFM Cap., the Custos of Zambia, inspired us with his deep insights on how God chooses us ordinary persons to become His instruments. We need to serve him through our humble service in and through ordinary ways. Br. Amando, Vicar General of  the TOR, inspired us on the need to be spiritual and fraternal.

“God’s call is amazing when we discover meaning in following Jesus by being a Franciscan and maybe sometimes our own family members may not understand why we became a religious. But later on they get inspired by our choice and mission.”

“The workshops were truly so enlightening and enriching. They were grace moments of sharing of experiences and ideas, and profound fraternal interaction. It was so beautiful and consoling to realize that we are facing similar challenges in the work of formation, irrespective of the diversity of places and affiliations in the Throughout the period of the program the relationship among the brothers portrayed a deep sense of oneness, irrespective of the fact that we belong to different families within the Franciscan Order. This, in my own assessment, shows clearly that, for the African friars, the age-old controversies, as ‘providential’ though they were somehow, that gave rise to the divisions in the one family of our Seraphic father St. Francis, has become only a history. May this spirit of unity sustained by seraphic love continue to be our strength as we face the challenge of witnessing to the Franciscan charism in our great continent.”

We need to ignite this passion, first and foremost, in the formators and then in others such that we prepare ourselves well to respond to the call of God.

More in this category: « A Week for the New Provincial Ministers First Pan-African Congress of the OFS »