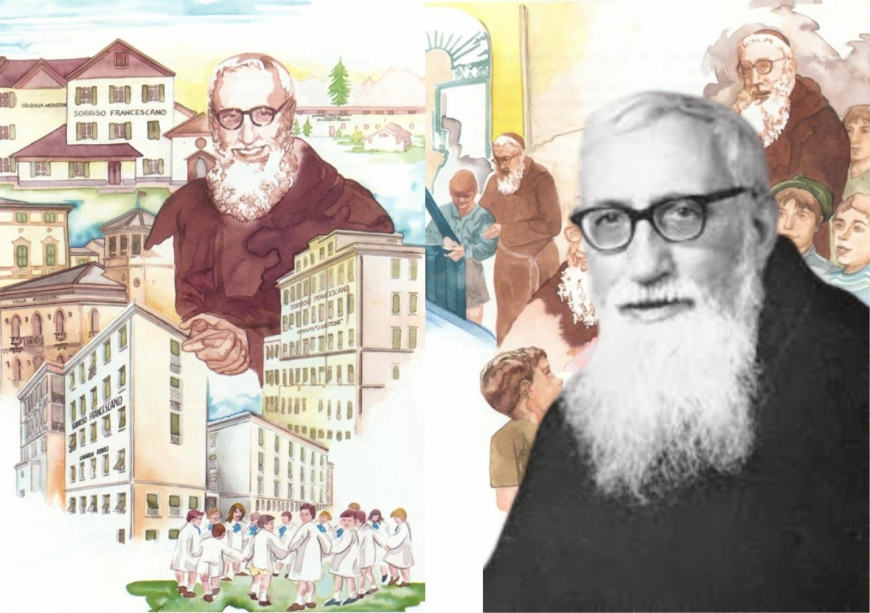 Pope Francis, on August 5, 2022, authorized the Dicastery for the Causes of Saints to publish the super virtutibusdecree of Father Umile from Genoa, founder of the Franciscan Smile and of the Little Handmaids of the Child Jesus. This first milestone is the fruit of many years of commitment and of many who have worked and prayed. Today we cannot forget two friars who have never doubted the holy and precious life of Father Umile: Fr. Renato Galsaldi († Genoa 2014) and Fr. Andrea Caruso († Lourdes 2019).

Father Umile was born in Genoa on April 21, 1898, the second son of the three children of Antonio Bonzi and Lavinia Podestà, he was baptized in the parish of S. Maria dell’Immacolata in Genoa on April 23, receiving the names Giuseppe and Giovanni.

From 1906 to 1910 he attended schools at the Emanuele Celeste Institute in Genoa, subsequently enrolling in the Ugolino Vivaldi technical school. After obtaining his diploma and license in commercial practice in July of 1916, he was hired by the Credito Italiano of Genoa and the following year he moved to the Cassa di Risparmio-Monte di Pietà of Genoa.

From his early years, the Servant of God revealed an uncommon spiritual sensitivity as a soul in search of God. Between the ages of 15 and 20, he obtained a desire to enter the Order of the Capuchin Friars Minor, taking as his inspiration and model Brother Taddeo Cambiaso of San Cipriano, a questor friar. On August 15, 1918, he entered the novitiate and received the name Br. Umile of Genoa. Having made his temporary profession on August 16, 1919, he was sent to the monastery of Genoa-Quarto for studies in philosophy and then to Genoa-S. Bernardino for theology. He made his perpetual profession on September 17, 1922 and was ordained a priest on January 25, 1925. Sent to Rome on October 17, 1927, he obtained a degree in philosophy from the Pontifical Academy of St. Thomas Aquinas and on July 2, 1928 a degree in Sacred Theology from the Pontifical Gregorian University.

Returning to his province, he began teaching at the Capuchin Theological Study, wrote works on theology, particularly delving into the mystical experience of St. Catherine of Genoa, and exercised the preaching ministry.

His quiet life as a professor was shattered by the tragic events of World War II and the postwar period. The city was devastated by harsh bombings. Amid the rubble, the Servant of God saw the many wandering children who were orphaned, starving, homeless and traumatized, and moved by compassion, began to gather them into the monastery of Genoa St. Barnabas. There, in the tragic year of 1945 was born what would later become the work of the Franciscan Smile, which would develop in various homes, schools, and workshops with the aim of taking in orphaned children and preparing them for the workforce. In the 23 years during which he directed the Franciscan Smile, he went out begging through the streets of Genoa – he was well-liked and received graciously by all.

On July 10, 1948, Cardinal Giuseppe Siri erected the Franciscan Smile into a religious foundation, which was also civilly recognized the following year. Even further, the Franciscan Smile was submitted to the diocesan Ordinary and given more autonomy from the Capuchin province. The position of the Servant of God as a member of the Capuchin Order and at the same time dependent on Cardinal Siri created some degree of tension with religious superiors, brothers of the Order and benefactors. Meanwhile this work continued to spread with the help of the brothers and the many benefactors, and houses were opened in Genoa, Savona and La Spezia.

For the service of the Franciscan Smile, Father Umile founded the Little Handmaids of the Child Jesus in 1946 and initiated the establishment of a seminary intended for the same purpose, but this did not reach full maturity. Father Umile, in all his correspondence, wrote in capital letters: God alone and his love, revealing how the love of God was at the very center of his life, his work and his prayer.

As a follower of the poor and humble St. Francis of Assisi in the traumatic wake of World War II, he came to know the will of God, which was calling him to a greater love of neighbor. And having once been a teacher of theology, he now fully gave himself to tending those wounded and innocent children who had suffered from the violence and selfishness of adults, to give them a future and to restore their lives. He did not abandon the culture that surrounded him but used it to form a new generation given to hope and to building peace.

In 1967, he began experiencing serious health problems that progressively weakened him, making his ability to walk very difficult. On September 8, 1968 he broke his shoulder and at the beginning of 1969, due to his compounding problems, he asked to be transferred to Villa Santa Chiara, formerly Villa Piuma, the first and most important administrative hub for the Franciscan Smile. There, he died on February 9, 1969, surrounded by the Little Handmaids and his closest co-workers.

He was a compassionate and charitable friar who took it upon himself to respond to the silent cry of the many children, the innocent ones, who had lost everything they loved to the violence of war. Now we can invoke him to grant each of us the ability to give of ourselves tirelessly in the name of love, and to obtain for us the grace to build up the body of Christ that proclaims His peace as the singular vessel that carries God’s truth, justice and forgiveness to the world.

More in this category: « Letter of the Minister General The Social Theater for Healing the Wounds of War »