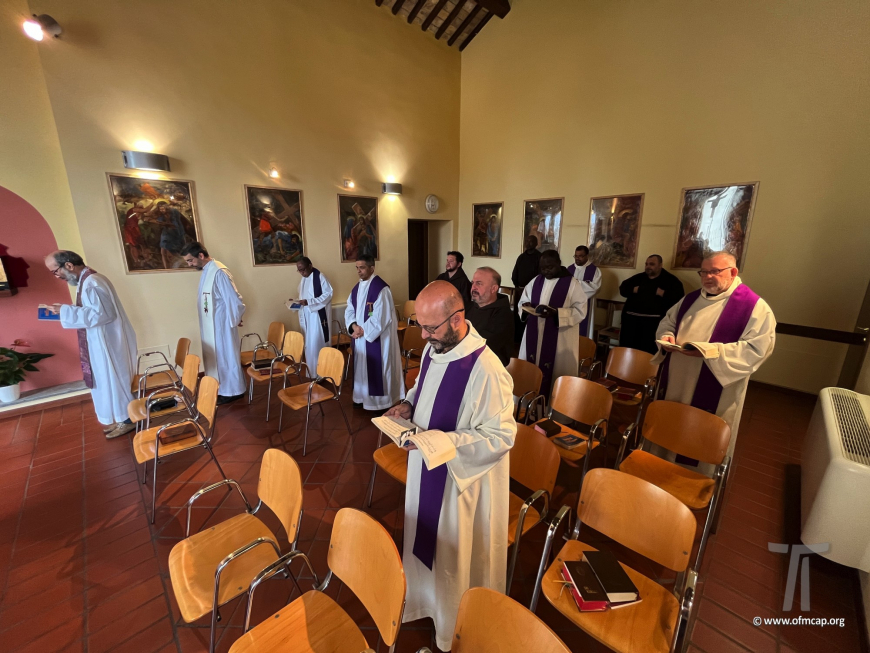 From March 13 to 18, 2022, several friars from the General Curia made their annual retreat in Frascati preached by Br. Franco Carollo from the Province of Veneto who emphasized the power of the Word of God that nourishes us daily and brings depth and consistency to our lives when we listen with an open heart. Without this Word, we would lack the nourishment necessary for life.

He hinted at his experiences in religious life and pastoral ministry during his conferences. Br. Franco served as provincial councilor, was a formator of post-novices, rector of the Shrine of the Madonna di Castelmonte, Udine (well known among the faithful of Friuli and Veneto), rector of the Basilica of Loreto from 2014 to 2021 and is currently a member of a local fraternity in Conegliano.

The relaxed and silent atmosphere of our friary in Frascati near Rome provided a favorable atmosphere for hearing these reflections and then meditating on them. We were also grateful for the thoughtful hospitality of the fraternity. The reflections focused on various passages from the scriptures, well-known staples of God’s revelation towards man, demonstrating the divine mercy as it envelops him and gives him sustenance, and in the end affords to him the gift of the divinity Himself through Christ. The simplicity and depth of these meditations evoked a response on the part of the participants during a group sharing, in which they expressed their hopes of reaching their potential as "small steps" on the path of personal and community growth. Br. Franco concluded the reflections by leaving everyone with a simple observation: without mercy it is not possible to live well together, and we should seek the necessary skills for living fraternity; we see this especially in the context of humanity’s need for peace, which – as we see over and over again – cannot be achieved through the powers of the world.

Photos from the Archives

More in this category: « St. Veronica Giuliani Our Presence in Europe »