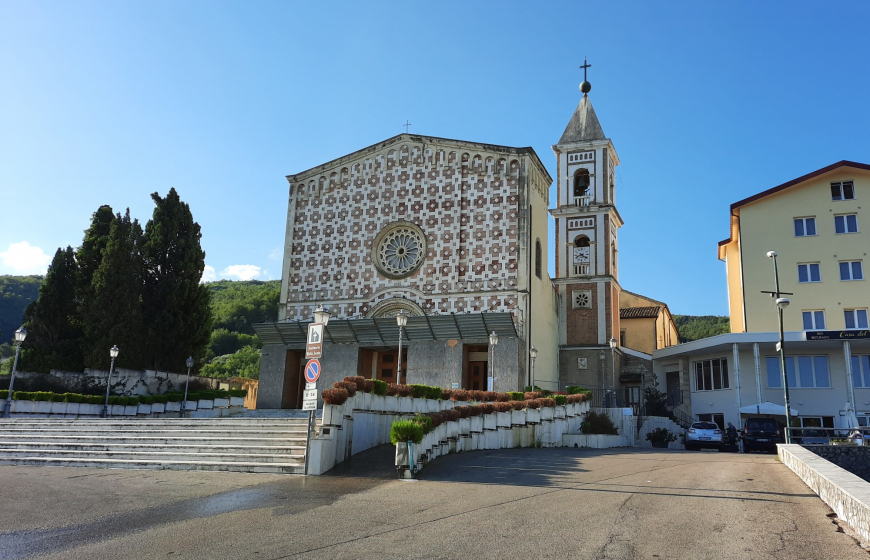 As part of the celebrations for the feast of the Transfiguration of Jesus (6 August 2021), the community of Capuchin Friars in Manoppello, Italy wanted to commemorate, albeit a year late due to the pandemic, the four centuries from the initial construction of the friary, begun in 1620, which was from the beginning inseparably linked to the Holy Face. Large panels outside the Basilica tell the story of the structure's origins as pilgrims come to visit the Sanctuary.

The conference, introduced by the provincial minister, Br. Matteo Siro, featured Br. Luigi Del Vecchio, who outlined the presence of the Capuchins in Manoppello, the construction of the small and modest friary almost hidden at the foot of the Maiella portion of the Apennine Mountains. The building was subject of various renovations and extensions over time, particularly in the twentieth century. He recalled the bitter expulsion of the friars due to the suppression of religious orders at the time of the French occupation (the post-unification period). Consequently, the Holy Face remained closed in the church, with the entire Manoppello community keeping watch over the friary until the return of the Capuchins was possible.

Br. Francesco Neri, general councilor of the Order, in a discourse once reflected upon the theology of the Holy Face, emphasizing how the identity of a given person is most immediately expressed in the face. The Holy Face of Manoppello, “teaches us to adore and honor him”, he said, and then indicated the ears and eyes on the image “that call” and “that forgive” and then the mouth “that opens to a smile”. Whereupon he followed with a passionate invitation for the faithful "to be amazed by and to marvel at the Holy Face".

The German writer Paul Badde, author of essays on the Holy Face published in various countries around the world, in one eloquent reflection began by recalling how throughout its history, the holy image was not made public for a long time, except for rare circumstances and for processions. It was only in 1923, during the latest of a series of adaptations made in the Basilica, that the superior of that time, Br. Roberto, had the current reliquary built above the altar. Various arguments have been set forth, beginning with the identification by Br. Domenico da Cese (1905-1978) of the Holy Face in the shroud mentioned in the Gospel of John and then in the veil of Veronica, as claimed years later by Br. Heinrich Pfeiffer, former professor of Christian art history at the Gregorian University. His studies on the identification of the Holy Face via Veronica emerged in the international media on the eve of the Great Jubilee of 2000. The memorable visit of Benedict XVI to Manoppello on September 1, 2006, which Badde considered one of the most significant gestures of his pontificate, has further strengthened awareness of and devotion to the Holy Face around the world. Just three weeks later, the Pope raised the church to a minor basilica and exactly one year after his visit he offered his personal prayer to the Capuchin Friars.

The Holy Face of Manoppello is truly an inexplicable image; a very thin veil that seems much like sea-silk, visible from both sides, measuring 24 cm x 17.5 cm and placed above the altar of the Basilica. For many scholars, it is the face of the Resurrection. The image shows the suffering face of a man, which is traditionally believed to be the face of Christ. Upon entering the church, the image of the veil, crossed by the light, appears completely transparent, almost invisible. Approaching the altar, the appearance of a face progressively becomes visible, placing itself on the left or right of the altar. The image can be more closely viewed on the other side of the reliquary, accessible via a staircase behind the altar. Especially striking are his eyes, his lively, intense and profound gaze, which is difficult to forget.

The veil is encased by two glass panes with an ancient wooden frame made by the Capuchin Br. Remigio da Rapino in 1618, who was passing through the town the same year that the sacred image was acquired by Dr. De Fabritiis, who kept it devotedly in his house in Manoppello. He soon gave it to the Capuchins for the interest of promoting widespread veneration. The Holy Face seems to have been present in Manoppello since the previous century, as can be understood from the Relatione Historica by Br. Donated by Bomba; he was commissioned by his provincial minister to draw up a document on the mysterious image at the time it was donated. The wise friar was well aware of the miraculous nature of the veil, attesting in 1640 and then again publicly in 1946, that it was not a painting.

This conference was also intended to foster a wider knowledge of the precious veil in the context of Capuchin communities everywhere in the world.

The rector of the Basilica of the Holy Face of Manoppello, Fr. Antonio Gentili

You can further consult:

More in this category: « The Zeal for Religion Meeting of the Post-Novitiate Men in Formation of the CECOC »