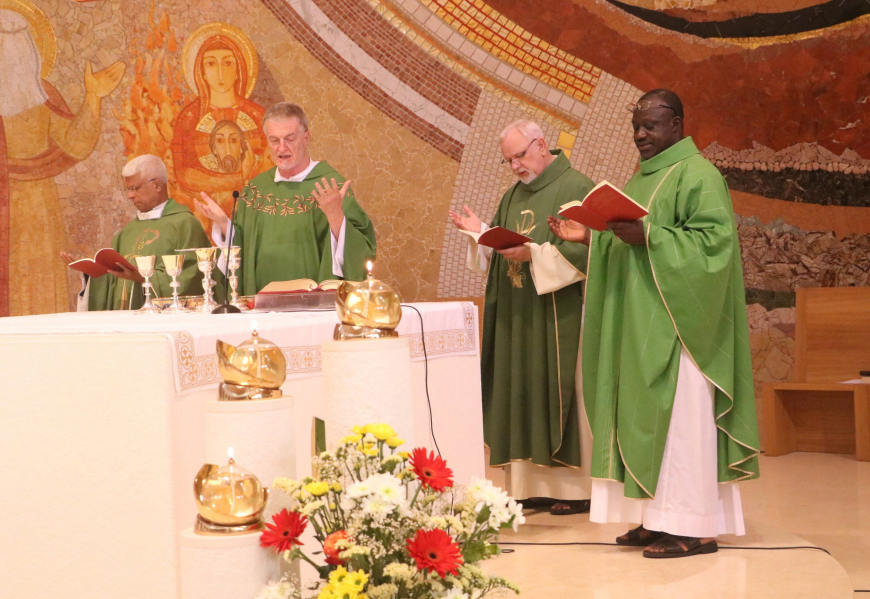 Closure of the Academic Year
at the International College of St. Lawrence of Brindisi

Rome. We end each academic year with gratitude and celebration, as was the case in June at our International College. The 2020-2021 school year, much like the year before, was beset with problems related to the pandemic, causing many difficulties both in terms of fraternal life and the academic activity outside the community, aside from the tedious details involved with moving between countries. But by the grace of God, all these difficulties were surmounted, and the 2020-2021 academic year reached its happy conclusion.

The solemn celebration took place on June 19th. The whole community of the College were gathered together: students, friars of the local fraternity and the house staff -- first in the large chapel and then in the piazza in front of the College. The General Minister, Br. Roberto Genuin, presided over the Mass, at the end of which, the Rector, Br. Andrzej Kiejza, summarized the work of the year as follows. “We started this academic year hoping it was better than the previous one, but instead we have had even more difficult experiences. Between November and December, several of our brothers fell ill with Covid: therefore quarantine and isolation. During this year, many of us have lost parents, relatives and confreres from their Provinces. All this was a very difficult. But when we look back at everything, even over such a short time, we recognize the tangible help of God, the solidarity and assistance of the confreres, the bond of friendship with those close to us. This experience enabled us to endure the most difficult moments. For these great gifts of both God's grace and human friendship, today we give heartfelt thanks."

The Rector followed with an overview of the year's activities: "Our fraternal community, despite the difficulties, has lived a fairly normal life, based on a daily rhythm of prayer, work and recreation."

After addressing the student body, he further extended his acknowledgement and gratitude to the General Minister "for his presence among us ... and for the support and interest he shows at the College". With him he also thanks the Vicar General, Br. José Angel Torres Rivera, and all the general councilors and confreres of the General Curia.

He also recognized the guests and the confreres present from the other communities dependent on the General Curia.

A special appreciation was made to the friars of the College, to the confreres of the Historical Institute and to all the professors who continually assist the students in their intellectual work; as well as the lay brothers of the fraternity, who were commended for their patient and silent service. A particularly heartfelt recognition went to Br. Marcelo Gasparin, who returns to his Province of Rio Grande do Sul, Brazil, after six years of dedicated service.

The rector again commended the student friars “for having created a community of prayer and work”, and then acknowledged the staff for their invaluable service.

Finally, he recognized his co-workers in administration: vice-rector, Br. Bona Marcel Rodrigues; the community’s spiritual animator and General Councilor Br. Kilian Ngitir; and the bursar of the college, Br. Maximino Tessaro. “Your work,” he concluded, “and the dedication with which you carry it out is something that cannot be adequately appreciated. Thank you!”

Once the liturgical concelebration and other formalities were over, the party continued in the piazza in front of the College, featuring an international festival of ethnic cuisines along with music and dancing.