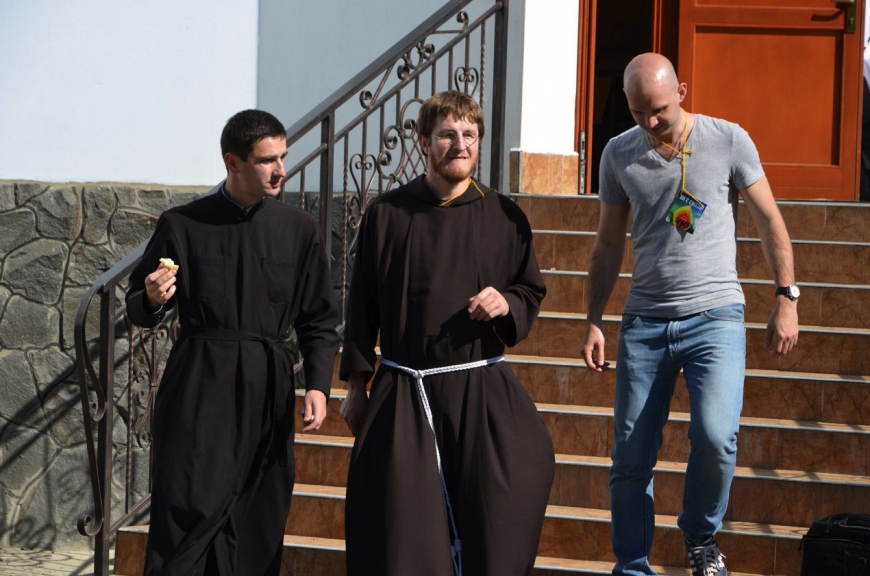 Uzhhorod, Ukraine. The Capuchins of the Custody of Ukraine dedicated to Saint Pio, responding to the invitation of Bishop Milan Shashik of the Greek-Catholic Diocese of Mukachevo (siu iuris) arrived in Uzhhorod, Ukraine on August 15, 2012.

Initially, the community lived in a separate part of the seminary. At that time a small Capuchin structure was being built in the so-called "new area" of the city - a large area with condominiums and apartments. After three years, the friary was consecrated and the friars took residence there. Previously, for about a year, they celebrated the liturgy in the Greek-Catholic church of the monastery. Responding to the bishop's request, the friars take part in the formation of seminarians and local clergy. Three of the four friars in the community are teachers in the seminary and one is the spiritual director. The friars give retreats, days of spiritual formation and days of theological formation. They also serve the monastery church, which is located next to a parish. The religious community, in line with the Eastern tradition, carries out all domestic work (cooking, washing, cleaning) without the help of lay people.

During the Christmas Season, according to Franciscan tradition, the friars organize the so-called "living nativity scene", in which students take part in the role of actors. The undoubted attraction for children is a live donkey and an ox. The Capuchin friars of Uzhhorod are bi-ritual and, although only one of them is Greek-Catholic since baptism, the entire community has managed to fit into the Byzantine context, understanding and exercising the rite as much as possible.

On November 23, 2020, the bishop of the Greek-Catholic diocese of Mukachevo gave his written consent for the erection of a Capuchin house in his diocese, thus nulling the previous consent decree ad experimentum. This first attempt at the presence of the Capuchins in the Byzantine Catholic rite gives hope for the possibility of extending this ministry. In Ukraine, a practically Orthodox country, the majority of the Catholic Church is represented by Greek Catholics (about 7 million believers).