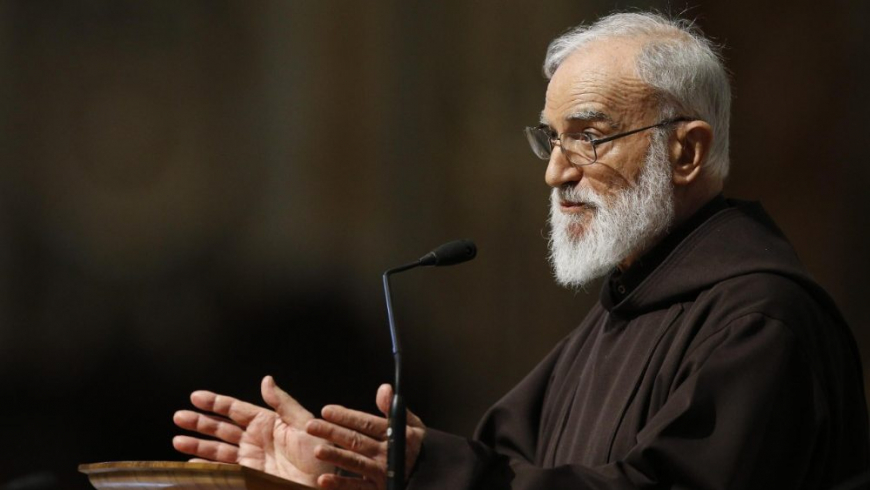 At 86, the preacher of the Pontifical Household will become a cardinal in the consistory on November 28: "It is not a recognition due to my person but to the Word of God".

For 40 years, Father Raniero Cantalamessa OFMCap has preached to the Popes during certain liturgical seasons of the Church such as Advent and Lent. He has a reassuring countenance, a calm voice and a simple ease of one who knows the Holy Scriptures well and for this reason is clearly able to explain and argue the love of God. On June 23, 1980, John Paul II chose him as Preacher of the Papal Household; for 15 years he was also a presence on television preaching the Gospel in a program called “Le ragioni della speranza" (The Reasons of Hope).

This Capuchin friar is blessed with a rich and varied personal history. He was ordained a priest in 1958 and graduated from Theology in Fribourg. Together with Giuseppe Lazzati, he founded the Department of Religious Sciences at the Catholic University of Milan. He frequently names his encounter with the Renewal in the Spirit movement as one of the greatest graces of his life, which also overflowed into the realm of Christian unity -- a topic on which he has always demonstrated his commitment. Our brothers and sisters of different confessions are unreserved in their esteem for him. In 2015, for example, at Westminster Abbey, he gave a sermon at the General Synod of the Anglican Church in the presence of Queen Elizabeth II.

The preaching I received ...

On Sunday, Pope Francis announced his name among the list of new cardinals. A surprise for him, who for years has lived at “L'eremo dell'amore misericordioso” in Cittaducale, Province of Rieti, providing his priestly service to a small community of cloistered nuns.

Often his very profound sermons are not only appreciated by the Pope but are also repeated on social media, providing great opportunity for a world that has difficulty listening ...

R. – I must say that I, myself, am full of admiration, not for my sermons but for those who listen to them. Because to think that a Pope like John Paul II, Benedict and even Francis finds the time to listen to a poor simple Capuchin friar is an example that they give to the whole Church, an example of esteem for the Word of God. In a certain sense, it is they who preach to me.

In the choice of new cardinals there is also the recognition of the Franciscan family: for example, Father Gambetti. Do you see this as a sign?

R. - Pope Francis brings a little bit of this flair to everything. And there's a touch of Francis in everything, including the last encyclical he wrote. But I wouldn't give too much weight to the fact that there's a certain number of Franciscans this time; in the past, the Jesuits featured prominently. I don't think he focuses on concerns like religious orders and such as much as he does on other things.

In what ways do you feel you can honor this new commitment to which you are called?

R. – I think I will continue for the moment, as long as the Lord gives me enough health and the Holy Father wills it, my main activity – pandemic permitting. And, if I have no orders to the contrary, I should be resuming very shortly, with the arrival of Advent.

You said that this appointment also surprised you due to the wave of endearment from leaders of different religious denominations ...

R. - It is true, it is true! I have received many emails ... also from some Jewish friends. I was very pleased because one of my passions has been to foster unity and dialogue, especially unity among Christians. On such an occasion, this kind of response is a sign of coming together that hasn't so much to do with me, but is a small glimpse of Pope Francis’s greater commitment to building bridges.

At the end of the list of new cardinals, Pope Francis asked for prayers for you, but he also asked for help in serving the Church and the people of God ...

R. – In fact, given this honorary role, more than the title's prestige, the real aim for me is the joy of being able to stay close to the Pope and support him with prayer and the Word.

Is there a particular person or moment in your life as a religious that came to mind when you heard your name being called at the Angelus?

R. - Sure. A figure in my life of great importance for me was Fr. Paschal Rywalski, who found himself General Minister when the Lord called me to leave university teaching and devote myself to preaching. I owe this choice to him and to his discernment, which then gradually led me to be a preacher of the Papal Household and also to travel the world and do spiritual exercises, including those of last year for the bishops of the United States. He was my spiritual father who played a particular role at that particular turning point in my life.

More in this category: « Suspension of the Beatification of the Martyrs of Manresa Change of Status for the General Custody of Holland »