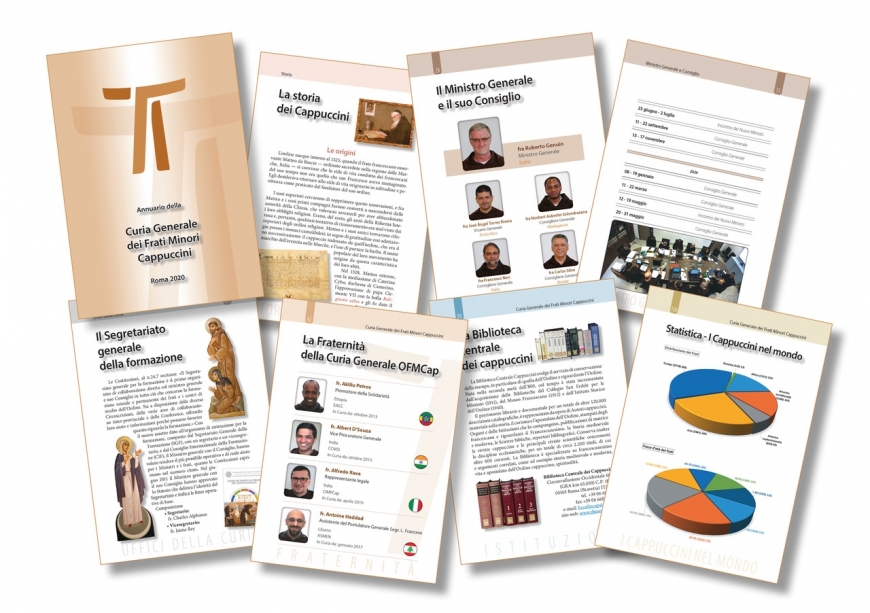 We are pleased to present to you the digital version of the first yearbook of the General Curia. This 120-page volume collects all relevant information that displays the work and functioning of the General Curia and institutions that collaborate with the Minister General in service to all the friars around the world. The yearbook reflects the current state of affairs since July 1, 2020. Happy reading!

“How good and how pleasant it is, when brothers dwell together as one!” Psalm 133:1

The beauty of living together as brothers always remains a demanding challenge for us and an ideal to be achieved. However, we who live together on a daily basis can already see these words in action, because the Lord, despite our weaknesses and frailties, is constantly giving us the gift of fraternal life according to the Gospel.

Even though geographical distances between myself and you are in many cases quite vast, the ideal way for me to maintain fraternal connections throughout the world is by my own personal visits and those of the Councilors, which, of course, often requires a lot of time. Another way is through the service done by the numerous offices of this General Curia and elsewhere. As Minister, I carry out my service with the help of many brothers: a community currently made up of 40 friars from 18 countries around the world.

This directory is intended simply as another way of reaching out to all of you. Several of you are familiar by personal experience with the Curia's location and what goes on there. Yet others see it as this distant thing -- perhaps somewhat mysterious, or even a bit exotic. Maybe this directory won't succeed in inspiring new revelations, etc., but we hope it will at least be a useful introduction to the beautiful and complex reality of the General Curia.

The directory is divided into five parts.

The first part: The Minister with his Council; groups and general commissions.

The second part: The Curia community; about the friars.

The third part: Offices of the Curia: what they do and how they function

The fourth part: The various Capuchin institutions, and the eight houses dependent on the General Minister.

The fifth part: Some particular information: statistics, the list of conferences, the succession of General Ministers of the Order from the beginning, and finally the list of our friars whose holiness has been officially recognized by the Church.

The included photos were provided exclusively by the Curia; they’re intended to provide a clearer visual reference.

On the pages of the annual report, you will find many names and photographs of friars you don’t know or have never met. But remember that behind every name and every photo there is a real, living brother who is giving himself in service for the entire Order.

Who knows whether in the future there’ll be photos of some of you appearing here as well! If it be God’s will, we look forward to one day welcoming each and every one of you here at this house!

More in this category: « Statistics OFMCap Changes in the General Curia »