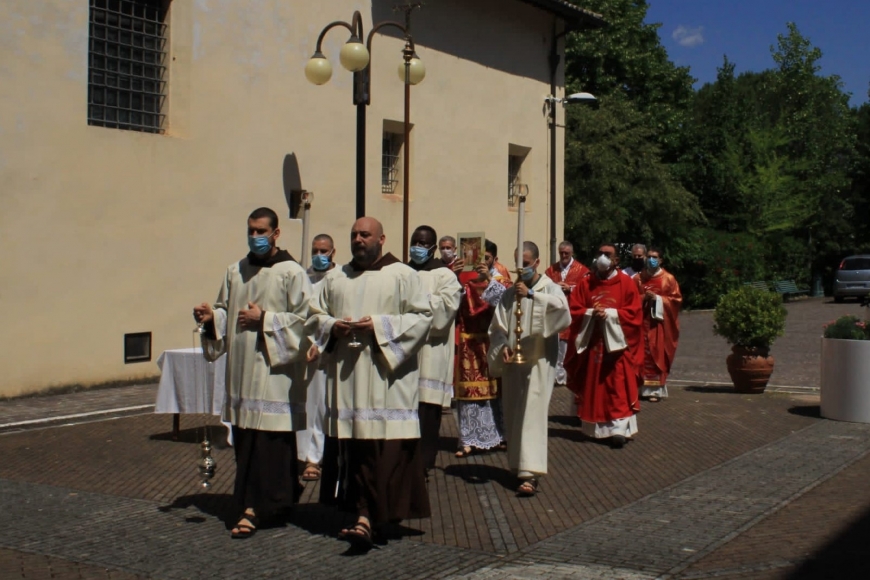 On July 3, 2020 at our site in Foligno (in Perugia), the Seraphic Province of the Immaculate Conception of the Friars Minor Capuchin was canonically erected – born from the union of three Capuchin provinces: Abruzzo, Rome and Umbria. The General Minister, Br. Roberto Genuin, read the decree unifying the three provinces and at the same time appointed the new leadership of the new province, which for these initial three years is made up of six members – two friars from each of the former provinces. The Provincial Council is made up of the following friars: Br. Matteo Siro (Pr. Umbria) Provincial Minister; Br. Marco Gaballo (Pr. Rome) Provincial Vicar; Brothers Carmine Ranieri (Pr. Abruzzo), Simone Calvarese (Pr. Abruzzo), Franco Ritirossi (Pr. Rome), Giovanni M. Brunzini (Pr. Umbria) Councilors. After the proclamation of the new province and of the new superiors, the Te Deum was sung, and then Holy Mass began, at the end of which the General Minister blessed the icon of the new province and the Provincial Minister and Vicar made the profession of faith and oath. This historic day ended with a fraternal midday meal.

The icon of the province was created by the artist Paolo Orlando, who also created the series of paintings for the Chapel in the General Curia. It represents the Immaculate Virgin Mary, patroness of the province and of the Order, at whose feet are represented St. Crispin of Viterbo, St. Felix of Cantalice, Our Seraphic Father St. Francis, St. Joseph of Leonessa, St. Veronica Giuliani. Felix, Joseph and Crispin were fellow confreres of the friars among the three provinces, where they lived and attained holiness. Veronica represents the link with the 2nd Order, and reminds us that we are "two faces of the same charism";  historically, she also lived and died in Umbria, at Città di Castello in the province of Perugia.

More in this category: « The End of the Academic Year The Houses dependent on the General Minister »