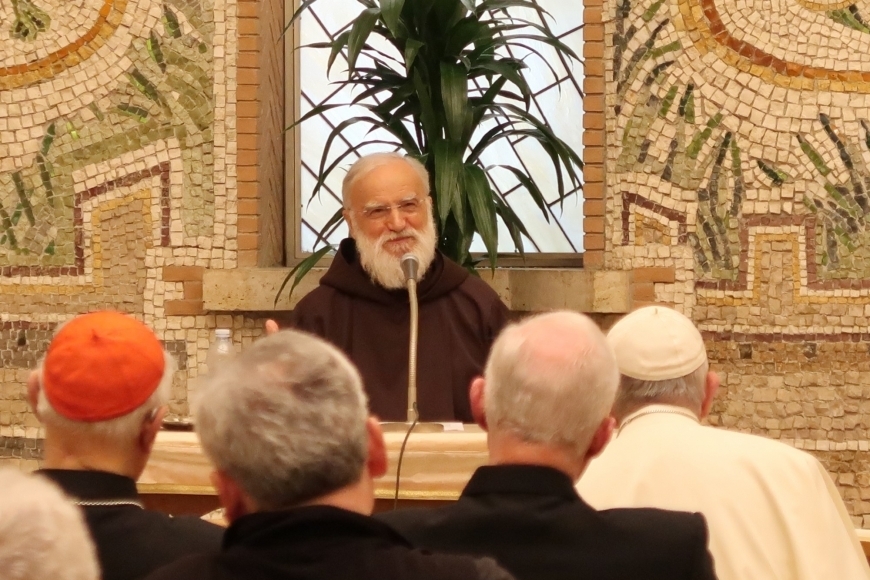 The anniversary. Cantalamessa: “I have preached to the popes for 40 years.”

Father Raniero Cantalamessa speaks of the anniversary of his appointment to the office of the Papal Household. The Capuchin: John Paul II chose me; it was a surprise.

It was June 23, forty years ago when Pope John Paul II chose the Franciscan Fr. Raniero Cantalamessa as Preacher of the Pontifical Household - an office traditionally entrusted to a Capuchin friar minor since 1743, although it is a role much more akin to the theological apostolate of the Order of Preachers (the Dominicans). It’s a period of service that has brought an air of distinction to this friar from the Marche, who since 1980 has found himself continuously leading the prayer meditations during the liturgical seasons of Advent and Lent in the presence of three Popes: John Paul II , Benedict XVI and Francis, as well as the Roman Curia.  "A record for preacher of the Pontifical Household that will be difficult to match," admitted the smiling 85-year-old Capuchin who spent the duration of the Covid-19 pandemic emergency away from the media spotlight in his beloved hermitage in Rieti, in the outskirts of Rome, with some cloistered nuns. "But I don't know if it is enviable. Only my predecessor in this position within the Papal Household, Fr. Ilarino da Milano, (aka Alfredo Marchesi), held the role of apostolic preacher for twenty years and for four Popes: Roncalli, Montini, Luciani and Wojtyla. I have a personal explanation for my duration in this role, and it's really no joke. Wojtyla, Ratzinger and Bergoglio, three wise Popes, all sensed that this was the place where I, Fr. Cantalamessa, could do the least harm to the Church, so therefore, they kept me in this office". A character, Fr. Raniero in 1969 was one of the "founding fathers" (along with Giuseppe Lazzati) of the Department of Religious Sciences at the Catholic University of Milan; he also boasts the distinction of being -- after the legendary Fr. Mariano from Turin -- the best known Capuchin friar on the small screen, having been a permanent guest of the RAI broadcast "A Sua Immagine" for 15 years.

How did you, Father Raniero, find out about this unexpected appointment?

It is true that the fortieth anniversary of my appointment as preacher of the Pontifical Household falls on June 23, but I actually started before that. In truth, my term of service began with Lent 1980, three months earlier. I believe that Pope John Paul II, quite rightly, wanted to audition me before officially assigning me the part. I remember a phone call from the then Capuchin Minister General Pasquale Rywalski. He said: “The Holy Father, John Paul II, has chosen you as Preacher of the Pontifical Household. Do you have any serious reasons to say no?" I searched for serious reasons, but couldn't find any, apart from a certain, understandable surprise and a strong sense of trepidation.

What does it mean for a "simple" Capuchin friar to "preach" to the Popes?

In reality, the roles are reversed in this case. It is the Pope who preaches to the preacher and to the rest of the Church. Sometimes when John Paul II thanked me after a sermon, I told him that the real sermon was what he did for me and for the whole Church. The example of a Pope who, every Friday morning at 9 during Advent and Lent, found the time to go and listen to the preaching of a simple priest of the Church!

What memory do you have of John Paul II?

Having gotten to know John Paul II closely for 25 of the 27 years of his pontificate was a privilege that I'm still struggling to appreciate. For me, Pope Wojtyla was a man who lived his whole life in the sight of God and before the world. The most vivid memory I have of him is that of a meeting I had at the end of that year's final Lenten sermon, just two weeks before his death. He had followed the sermon from his apartment. Sitting in his armchair, suffering but alert, we spoke to each other more with our eyes than with words. It was his personal farewell to me.

And of Benedict XVI?

My acquaintance and association with Cardinal Ratzinger dates back to the time when he was president of the International Theological Commission (ITC) and I was one of the thirty members, from 1975 to 1981. I was always struck by his capacity for moderation in the debates and by his perfect command of Latin. As a cardinal, he never missed my preaching engagements. And his eight years as Pope Benedict XVI meant for me the promotion of the doctrinal and theological dimensions of the Church's dialogue with the culture of the day. I believe that his renunciation of the Petrine ministry - the first in history totally free and unpressured from the outside - will have positive historical repercussions on the future of the role of the Roman Pontiff, making it more human-friendly.

In 2013, with the election of a pope to the throne of Peter who chose to be called Francis, you have almost glimpsed a prophetic return to that "evangelical radicalism" of which the Poverello of Assisi was the promoter and exemplar. Can you explain why?

My knowledge of Bergoglio dates back to the time when he was cardinal and archbishop of Buenos Aires. I remember him as a very distant man. I had the opportunity to preach two retreats to his clergy, the last of which was only a few months before his election as Pope. On television, I heard the name he had chosen and I saw him appear on the central balcony of St. Peter's Basilica, greet the people with "Good evening!" and ask to be blessed by the people. I said to those around me: “He is not inventing anything for the benefit of the cameras. This is the real deal. This man, Bergoglio, is who he is.” In the seven years since that day, my esteem (and my gratitude to God) has grown exponentially.

Among the curiosities of your preaching activity is a sermon given in 2015 at the General Synod of the Anglican Church in the presence of Queen Elizabeth. What can you recall from that historic event?

It was one of the most significant moments of my "ecumenical ministry" as a preacher. During these years, I've often been invited to speak to pastors of various Christian denominations, from Lutherans to Pentecostals. At the invitation of the Anglican primate Justin Welby, I gave the homily in Westminister Abbey for the inauguration of the Synod in 2015. The queen pointed out the novelty of the fact; she said if a Catholic priest had been invited to preach in Westminster, it meant that something was really changing among Christians.

Another key moment in your long biography was your encounter with the Renewal in the Spirit movement ….

In 1977, after much resistance, I surrendered; and during a stay in the United States, I received what - in the words of Jesus in Acts 1, 5 - is called "baptism in the Spirit". It was the greatest grace of my life, after baptism, religious profession and priestly ordination. A grace that renewed and reinvigorated all the previous graces, and which I would recommend for everyone to embrace, each in the way and according to the occasion that the Spirit offers him. Pope Francis leaves no opportunity to remind us: a true renewal of Christian life and of the Church can only take place "in the Holy Spirit". The unity of Christians is his work.

What dreams would you like to pass on as an older friar to the new generation within the Catholic Church?

I confess that recurring predictions of the inevitable decline of the Church and Christianity in an increasingly technologized society make me suffer, but they also make me smile. We have a much more authoritative prophecy to rely on: "The heavens and the earth will pass away, but my words will not pass away" (Matthew 24:35). To the new generation of Christians, I would like to cry out with the Apostle: "Jesus Christ is the same yesterday, today and forever. Do not let yourselves be carried away by various kinds of strange teaching" (Hebrews 13:8).

More in this category: « IV Day of the Capuchin Family The Capuchins. Documentary Sources »