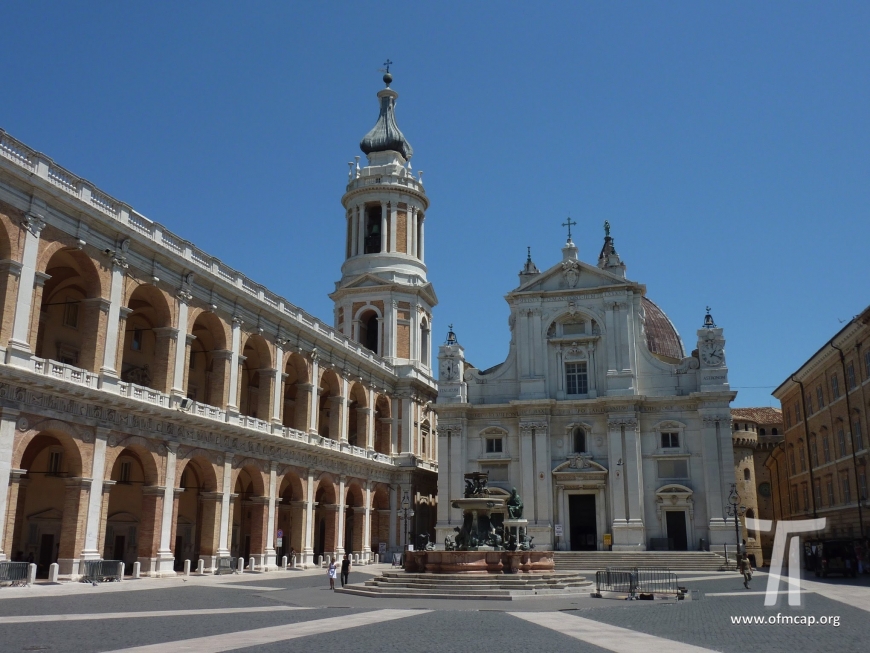 The Shrine of the Holy House of Loreto

Extraordinary Jubilee for the Year 2020

On the occasion of the centenary of the proclamation of the Madonna of Loreto as patroness of pilots, Pope Francis granted the Shrine of Loreto an extraordinary jubilee for the year 2020. The jubilee will open on December 8th 2019 and will end on December 10th 2020. On this occasion, we wish to make our wider fraternity better acquainted with this pontifical shrine guarded by the Capuchin Friars Minor.

The Shrine of Loreto preserves the Madonna's stone house transported, according to tradition, from Nazareth to Loreto in 1294. According to the ancient account of devotional and popular appeal, the house was transported there by angels. But, after more recent archaeological and philological study, and upon considering the building and the records, it’s now thought that the house was taken to Loreto by human means – by ship – with the assistance of the angels. It is the house of Nazareth, where Mary was born, was betrothed to Joseph, received the announcement from the Angel Gabriel and conceived the Son of God in her womb. It therefore recalls the mystery of the Incarnation.

The Holy House of Nazareth

In Nazareth, Mary's home consisted of two parts: a grotto, still preserved in Nazareth in the Basilica of the Annunciation, and a front house, with three stone walls, transported to Loreto. The section against the grotto did not have a wall of its own.

The Holy House of Loreto

In Loreto the three walls of the house of the Madonna were placed on a public thoroughfare leading from Recanati to its port, yet without its proper foundations. It was immediately the object of extraordinary conservative care, which is only fit for a precious relic: first, at the end of the 13th century, it was reinforced with masonry to create a foundation, then it was supported by counter-arches on the north side and finally, at the beginning of the 14th century, it was surrounded by a brick wall (called "Recanatesi") for its entire width and height. This building data has been duly verified during archaeological excavations carried out in the basement of the Holy House in 1962/65.

The Shrine of Loreto has been a destination for international pilgrimages since the 14th century. Curiously, it also contains a collection of artwork so notable that it's considered the richest Marian shrine in the world in this regard.

In 1469, Pope Paul II took to heart the construction of the existing basilica. The most famous architects of the time worked on its construction: Giuliano da Maiano, Baccio Pontelli, Donato Bramante, Giuliano da Sangallo, designer of the dome, Antonio da Sangallo the younger, and others. By the end of the 15th century, the adjacent Apostolic Palace was built -- conceived in the upper section by Donato Bramante. To Luigi Vanvitelli we owe the bell tower, erected in the middle of the 18th century.

Challenging structural restorations were undertaken in the last two decades of the 20th century, and implemented in two stages: one marking the 700th anniversary of the transfer of the Holy House (1294-1994 /95) and the other in anticipation of the Great Jubilee of 2000. Of particular importance and usefulness was the realization of the lower basilica, which serves well to facilitate the sorting of the innumerable pilgrims.

Approximately three and a half million pilgrims and visitors flock to Loreto every year. The former are attracted by the mystical charm of the Nazareth house, where Mary conceived Jesus, the Son of God. The latter are also drawn in by the imposing estate of artwork, with masterpieces by Melozzo, Signorelli at the end of the 15th century, by Lotto, in the middle of the 16th century, by Pomarancio at the beginning of the 17th century and by the valorous painters active between the 19th and 20th centuries.

Pilgrims and visitors come from all over the world. To accommodate them, an array of small spiritual and artistic guides were made available in twenty languages, including Japanese, Korean, Chinese and Arabic, as well as DVDs in eleven languages. The shrine's magazine - "Messaggio della Santa Casa" - is published in Italian and English.

The shrine of the Holy House of Loreto is a special center for the Sacrament of Mercy.

At the center of it all is the Holy House itself, where the faithful are invited to pause in prayerful silence. Here, the mercy of God the Father was manifested in the incarnation of his Son who, by his death and resurrection, reconciled sinful man with the Father of forgiveness.

St. John Paul II implied that the Holy House is a sanctuary for reconciliation par excellence, when in his letter marking the seventh centenary of Loreto (1294-1994), he wrote as follows: "The Holy House of Loreto, which still resonates, as it were, with the greeting "Hail full of grace", is a special place, not only for meditating on grace, but also for receiving it, increasing it, and if lost, finding it again through the sacraments. Above all the Sacrament of Reconciliation, which has always had such a significant place in the life of the shrine".

During the recitation of the Angelus on December 8th, 1987, the same pontiff had said: "The thought of the humble house in which the Incarnate Word lived for years convinces the pilgrim that God really does love man as he is, and calls him, comes after him, illuminates him, forgives him, saves him".

And he noted: "In Loreto, countless crowds of pilgrims every day from all over the world approach the Sacrament of Confession and the Eucharist, and many convert from unbelief to faith, from sin to grace, from lukewarmness and superficiality to spiritual fervor and commitment to witness".

In the Holy House, the pilgrim also invokes Mary, "Mother of Mercy", the one who gave birth to Jesus, "Incarnate Mercy of the Father".

The Holy House of Loreto is the house of Mary and therefore the home of every family.

“The incarnation of the Word in a human family, in Nazareth, by its very newness changed the history of the world. We need to enter into the mystery of Jesus’ birth, into that “yes” given by Mary to the message of the angel, when the Word was conceived in her womb. […] This is the mystery of Christmas and the secret of Nazareth, exuding the beauty of family life!” (Pope Francis, Amoris laetitia, 65)

The Pontifical Basilica of the Holy House is destined to become more and more a place of evangelization according to the claim expressed by Our Holy Father Francis in the motu proprio "Sanctuarium in Ecclesia". As a place of the first domestic church in history, the Shrine of Loreto has the vocation of providing specific reference to the promotion of spirituality within the family at the service of people in their everyday lives and of Christian communities, but especially for young people.

To coordinate this pastoral service, a family pastoral path was built for the benefit of pilgrims of all nationalities. The path is marked by milestones with branching trails designed to address all situations regarding human and spiritual support.

This visit was a gift for the city of Loreto and for all the pilgrims who come to Loreto every year to visit the Holy House. Pope Francis, at the end of Holy Mass celebrated in the Holy House, signed the apostolic exhortation Christus vivit, a fruit of the synod celebrated in October 2018 on the theme of young people.

On that occasion, he offered the shrine a threefold pastoral approach for the coming years: on family, youth and the sick.

For the family, a pastoral plan has already been started to accompany and support couples on their journey, addressing general concerns about family life.

For youth, the renovation of the John Paul II Center is being completed in order to give life to the pastoral points expressed in Christus vivit, aiding young people in their discernment and in choosing their own vocation.

For the sick, in addition to the centuries-old reception given to the pilgrims of UNITALSI, OFTAL and UAL, a health department dedicated to Cardinal Capovilla was instituted which specializes in rare diseases and the use of orphan drugs. Besides offering care, they also offer a master's degree program for doctors and nursing personnel sponsered by the University of Milan - Bicocca.

On the occasion of the centenary of the proclamation of the Madonna of Loreto as Patroness of Pilots (March 24, 1920 by Pope Benedict XV), Pope Francis granted Loreto an extraordinary jubilee for the year 2020. The jubilee will open on December 8 and will end on December 10th 2020. The Holy Door will be opened by Cardinal Pietro Parolin, Secretary of State.

The Basilica of the Holy House of Loreto will serve as the only jubilee church. It should truly amount to an unprecedented event of extraordinary significance for the Loreto shrine, striking at the very center of Catholicity as a place of grace, mercy, conversion and peace.

The Honorary Committee for the Jubilee, installed last September 8, is now organizing the calendar of events, and is preparing a spiritual guide to help pilgrims on their jubilee journey, as well as other pastoral initiatives useful for living this year of grace with faith. It is indeed taking shape as a year rich in grace and pastoral commitment where all will be called to give the best of themselves for the glory of God and for his and our Mother, the Virgin Mary.

A privilege and a commitment for the Capuchins

The Capuchins, characterized by their different endeavors and different ways of doing things since the beginning of their reform, became the sole custodians of the Sanctuary of the Holy House in 1934 at the bidding of Pope Pius XI. The Order, to which Pope Pius XI had entrusted the custody, then gave the important, delicate task to the Province of Picena, who have since served the shrine with admirable dedication, fostering its spirit of worship and devotion.

Over the last few years, due to a decline in vocations and avialability of friars, amidst other various difficulties, the Province of Picena was forced to reevaluate their full commitment. Thus on March 25, 2015, by decree of the then General Minister, Mauro Jöhri, the fraternity of Loreto came under direct dependence of the General Minister, becoming a General Fraternity.

Today we are truly an international fraternity with the presence of friars from 17 circumscriptions and 10 different nations.

Our fraternal life requires special commitment, but it also challenges us daily to live and grow with the many diversities, recognizing in them opportunities for true unity and communion.

Living in Loreto at the Holy House is a gift and a privilege that invites us all to witness, to brotherhood and to the joy of being friars. It is a grace that also comes with real potential for an authentic and meaningful vocation ministry.

Br. Franco Carollo OFMCap
Guardian of the Community, Custodian of the Shrine

More in this category: « Logo of the Capuchin General Curia Symposium on Saint Lawrence in Vienna »