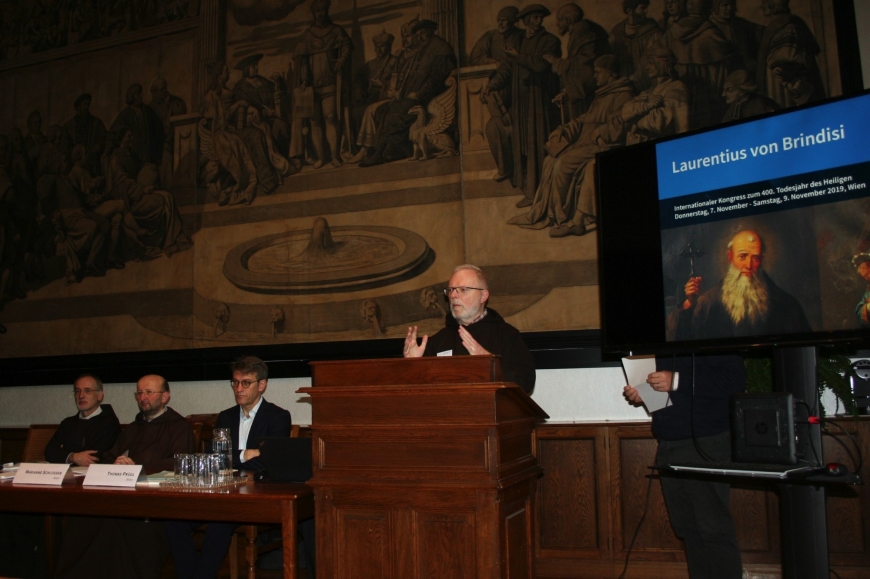 Vienna. A symposium entitled "International Congress: Lawrence of Brindisi" was conducted by Prof. Marianne Schlosser,  theologian and university professor of theology of spirituality at the Catholic Theological Faculty of the University of Vienna (Austria). The event included the participation of about sixty brothers from Poland, Switzerland, Austria, Germany, Italy and the Czech Republic, as well as other theologians and historians of the Friars Minor, Dominicans and Jesuits. The General Minister, Br. Roberto Genuin was also present and offered an official letter of greeting in both German and Italian.

Among the other speakers were Br. Gianluigi Pasquale, Professor at the Pontifical Lateran University of the Venice Province (where St. Lawrence met the Capuchins) with a conference in German entitled: "Laurentius - Vordenker des heutigen Begriffs ‘Heilsgeschichte’?" [Lawrence – Mastermind of the Concept of “Salvation History”?]  and Br. Alfredo Di Napoli, from the Province of Bari (the birthplace of St. Lawrence), who gave a lecture entitled: "Brindisi at the time of St. Lawrence and his current cult in Puglia". With this international symposium, the "Laurentian Year" dedicated to St. Lawrence of Brindisi, "Doctor Apostolicus" marking the fourth centenary of his death (1619-2019) was concluded.

More in this category: « The Shrine of the Holy House of Loreto First International Formation Conference for Assistants to the SFO & Franciscan Youth »