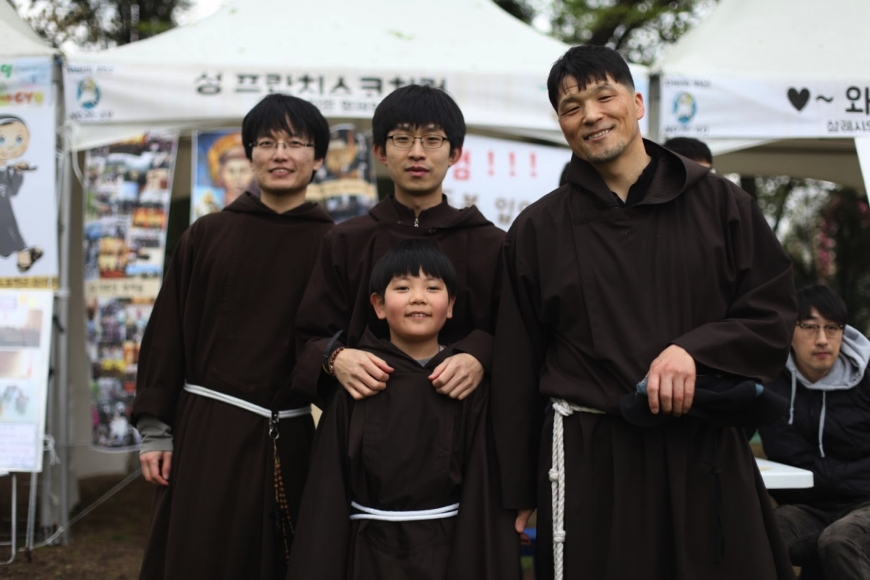 The Capuchin Custody of Korea

In January 1986 Cardinal Stephen Kim, Archbishop of Seoul, invited the Irish Capuchins to Korea to establish in the heart of Seoul city a Chapel of Perpetual Adoration of the Holy Eucharist and to witness our special charism of the Sacrament of Reconciliation. On 16 July the Capuchin flag was planted here by four Brothers of the Irish Province (see Photo of Brothers). The Irish Columban Fathers and the Korean Franciscans provided accommodation allowing the Brothers time to study the language and culture. In the Spring of 1990 we established our first ‘friary’, an apartment, in Seoul dedicating it to St Mary of the Angels. Between 1990 and 2000 more Brothers arrived, and others returned home. Of special mention was a former Provincial, Br Berard Creed (then in his 70s), who extended his two-week Golden Jubilee visit to Korea by almost two years! In December 1995, tragedy struck! One of our youngest missionaries to Korea, Br Liam O’Dea, was killed in a hit and run accident in Seoul. He was only 27yrs old. But his death was not in vain. Somewhere in Korea four people are living with his organs. This gesture by his family made national news because it was the first organ-donation made by a foreigner in Korea. Br Liam’s remains were returned to Ireland for burial. In 1996, our foundation as a ‘House of Presence’ was elevated to a ‘Delegation’, and eventually a ‘Custody’ in 2005 by Br John Corriveau.

The Korean War 1950-53 was devastating. Technically, the war has not ended, and peace is held by a fragile armistice and heavily mined DMZ dividing the peninsula for the last 66 years. Both nations remain on constant conflict-alert! South Korean men are mandated to do military service for 18 or 24 months. North Korea is truly a hermit kingdom and a police state that controls its people with fear, malnutrition, brutal punishment and poor education. South Korea’s economic success on the other hand, became known as The Miracle on the Han River! The country morphed from being a Hermit Kingdom to an Internet Kingdom, from being a Dynamic Korea to becoming Asia’s Kingdom of Cool. The Korean Wave of social and economic success has made Korea a global brand for cars, ships, technology, civil engineering electrical goods, TVs, computers, smart-phones, sports and entertainment. Koreans possess a great spirit of generosity, volunteerism and celebration of family life. Indeed, Korea’s resilience in overcoming adversity (especially during the Asian IMF crisis of the late 1990s), is largely attributed to its cultural value of working as a group/community.

The Catholic Church, too, has considerable influence upon Korean society. The Korean Catholic Church is unique in that the faith was introduced by native Koreans who studied theology abroad, not missionaries. The violent persecutions and martyrdoms of 19th century became the seed for tremendous growth for the Catholic Church. That faith sustained the people throughout the Japanese occupation 1910-1945. But the dictatorial rule of post-war governments in rebuilding the new economy forced the Catholic Church to raise its voice in support of the pro-democracy movements of the 1980s which were brutally suppressed. The voice of the Church for justice, for human rights, for the poor under the courageous leadership of Cardinal Stephen Kim, earned great respect from all and inspired many ‘conversions.’ The Church continues to be such a voice especially today for the Gospel of Life. Of a population of c.50 million, about 5 million are Catholic, c.7million from Christian denominations, 15/20 million Buddhist and a remaining profess nothing. However, the nation’s governance and cultural practices are based on Confucian principles. Every year, hundreds of Koreans are catechized (not evangelized) and baptized, but many soon drift away. And many Catholics still resort to the age-old practices of Shamanism and fortune-telling for ‘answers’ to life’s problems and dreams. Vocations, too, are on the decline due to growing materialism and secularism.

Korea’s “excessive sense of competition” is destroying marriages, family life and childhood development. Unjust working conditions and wages, financial debts, rising youth unemployment, political corruption, academic exploitation, the stigma of failure, stress or depression are behind huge numbers of divorce and incidents of bullying. Suicides are among the highest in the world, even among old people. And Korea is aging rapidly. By 2050, it will be the oldest country in the world, with lowest birth-rate and the highest number of abortions per capita. As a result, millions of women and men are suffering in silence the psychological, emotional and spiritual pain of abortion. Yet, deep down in their hearts, people know something is missing. They are looking for peace, hope, healing, meaning, a reason to live. This, then, is the current reality we Capuchin Brothers are called to evangelize in with the charisms of fraternity, hospitality, simplicity……  What follows is outline of our current situation within this reality:

Currently, we have four friaries (see map below): 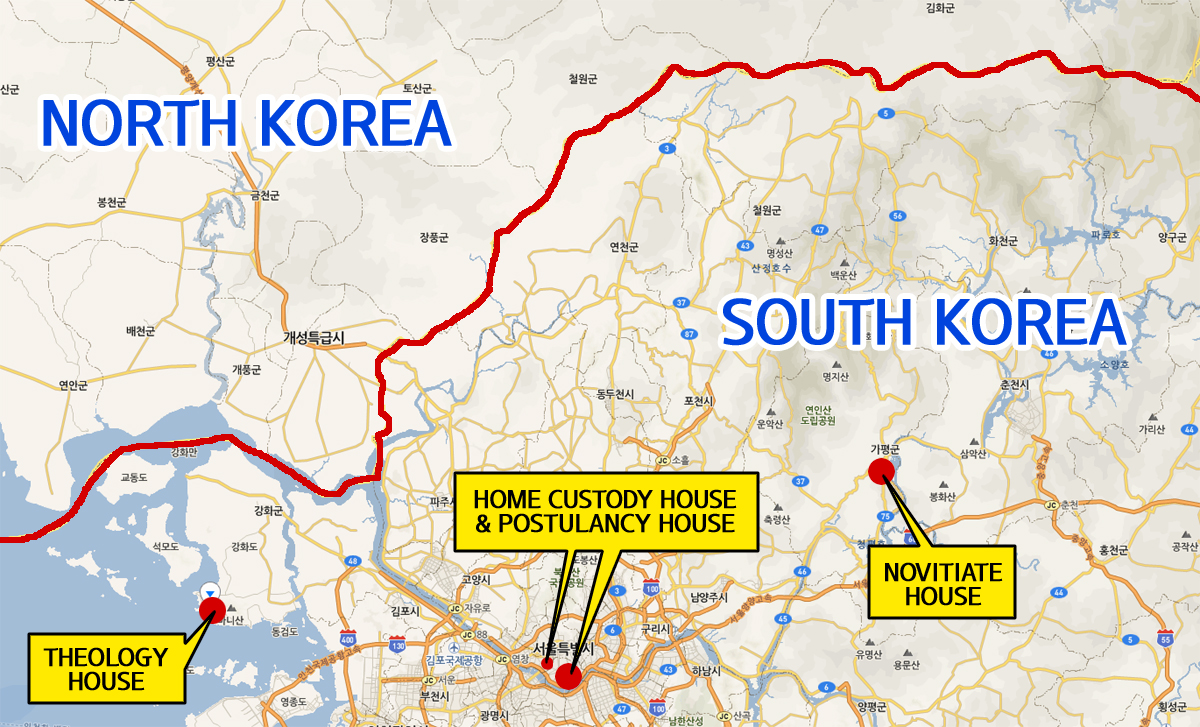 Fraternal Life - With no big friaries to hide in, living in small fraternities is a real test of faith and character formation. Conflicts are inevitable, especially with issues of clericalism and individualism. And we are vigilant about the invasive influence of materialism and technology that pervades every level of Korean society.

Vocations - The first postulants came in 1993. In May 1999 two of them made their Final Profession and will celebrate their Silver Jubilee next January 2020. In 1996 we acquired land in central Seoul to build our first friary which was completed in June 1997 and dedicated to St Mary of the Angels. In 1998, rented apartments in Gapyeong, Diocese of Chuncheon, served as the novitiate until the construction of a permanent novitiate in October 2000 dedicated to St Felix of Cantalice. That same year, we acquired a house (formerly a restaurant and family home) in the Diocese of Incheon for special formation for priesthood dedicating it to St Laurence of Brindisi.

The Custody hosts a vocation day once a month in our Seoul house. Most inquiries come through our website www.capuchin.kr, others through personal contact. The Custody doesn’t take candidates until they have completed their mandatory military service of 18 or 22 months. Vocations have always been few, but steady, despite several departures over the years.

Ministries/Apostolates – Many ministries and apostolates in each diocese are strictly regulated by the Church authorities. So, our efforts are restricted to collaboration with other religious and social service groups e.g. caring for the homeless and elderly, the sick, sponsoring the education of poor students. The Custody’s traditional apostolates and ministries are concentrated in the Seoul friaries and locality: daily public Mass, confessions, pastoral assistance to the local parishes and convents and military bases, and day-retreats.

Seeking Part-time Employment - was a resolution of our 2017 Chapter. This initiative was the Custody’s response to the former Minster General Br Mauro Jöhri’s call for circumscriptions to be more self-sustaining. One Brother obtained part-time employment as a driver for a courier company for about 3 months working 5 hours a day for 5 days a week. He also qualified and obtained temporary employment as a barrista, and also earned certificates in beer-making, and basic building construction. The initiative received positive comments from other Korean Religious Orders.

Collaboration within the PACC - Over the years, many of our Brothers have been fortunate to experience the global face of the Order by visiting various circumscriptions for special ministries, apostolates and formation, such as Ireland, India, Philippines, Thailand, Indonesia, Guam. Of particular interest is the Capuchin Medical Mission (CMM), Philippines which provides food, medical supplies and treatment to indigenous and undocumented poor people and tribes living in isolated mountain regions, often only accessible by foot.

More in this category: « Appointments of Delegates, Offices and Commissions Capuchin Creative Commons »