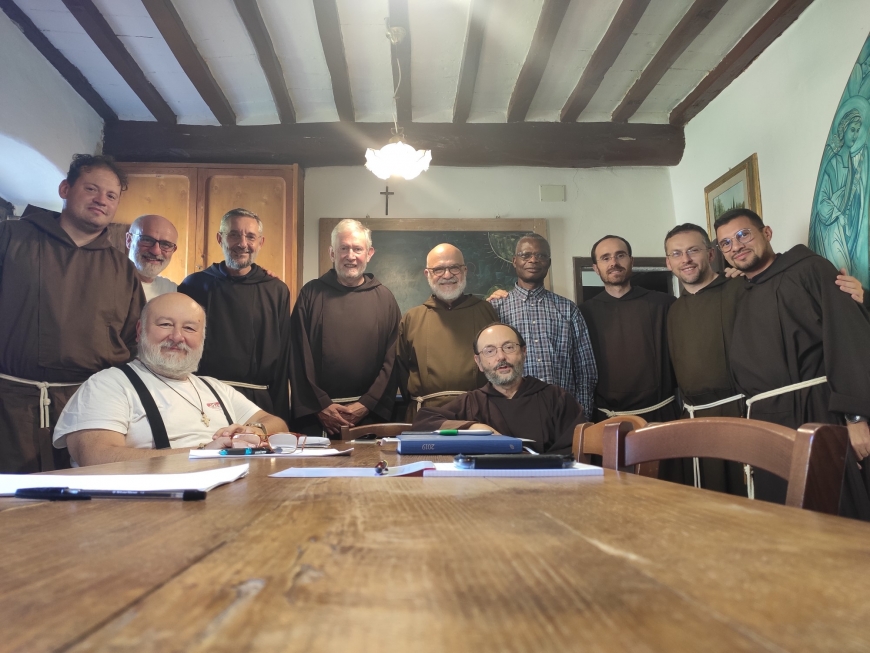 Le Celle di Cortona, a New Fraternity for the “Saint Lawrence of Brindisi Project”:
A Laboratory of Prayer and Fraternal Life

Le Celle di Cortona (The “Celle” Hermitage). Enchanted by this marvelous place, our Father, St. Francis passed through here first in 1211, and then after receiving the gift of the stigmata. And here, most likely, in 1226, he had to dictate that which is his most personal and intimate writing: the "Testament",  recalling the experience of his road to conversion up to that time.

For over 500 years, this enchanting place situated in the heart of nature and enveloped by gentle breezes of tranquility, was the seat of the Capuchin novitiate.

The style and essence of the friary, the beauty that surrounds it, the poverty of means, the healthy and temperate air, the atmosphere of recollection, all help to make this place – even today – an ideal location for a life replete with silence and prayer.

For this reason, a new project of fraternal life was started on Saturday, September 14, making a new and greater use of the Celle di Cortona friary. With the leadership of Br. Pio Murat, General Councilor, this effort has become the newest addition to what has commonly been known as "Project Europe", but today is re-coined the "Saint Lawrence of Brindisi Project". The current fraternities include: Clermont-Ferrand and Lourdes (in France), Kilkenny (in Ireland), Spello (in Italy), León (in Spain), Antwerp (in Belgium).

The Le Celle fraternity, like the other fraternities of the Project, gives witness today as a more international fraternity; and, in regards to the Order, is intended as a laboratory of prayer and fraternal life according to the spirit of our Constitutions. It’s not meant so much as an extraordinary observance of the life, but rather as an effort to concretize the notion that our life belongs to us, and that it is therefore possible to give it new value in the light of our charism, both for ourselves and for the whole world. Just as the General Minister, Br. Roberto, had already expressed in his letter at the beginning of the new sexennium: “We also want to give this kind of value to Le Celle di Cortona. It is one of our ‘Franciscan Places’ par excellence, which we believe could be very helpful to many friars in their need to taste anew the roots of our spirituality, to return to the sources, and to experience for a brief or extended period a peaceful atmosphere of simplicity, prayer, and welcome.” (Ringraziamo il Signore!, No. 33)

To this effect, the realization of this new fraternity, like the others already active, is intended as a witness for all the friars of the Order of a deepening of our fraternal life and prayer in an austere environment with an atmosphere of silence and natural beauty and with a joyful spirit of hospitality toward anyone who desires it.

As we extend our best wishes to these brothers for a bountiful journey, we also hope that they will inspire us by their testimony to the beauty of our life, by “fanning the flame of our charism” (Cf. Circular Letter to all the Brothers in the Order on Formation, 2008) more and more in today’s world, which is in such need of a stronger and more incisive prophetic presence.

It is encouraged that all the friars who want to can stop by and visit these fraternities in a spirit of learning, or in order to rekindle their enthusiasm, their spirit of brotherhood, and their ongoing formation. Indeed, it is our hope that many will be able to satisfy their need for taking some time at any one of these fraternities.

More in this category: « Positio sub secreto Appointments of Delegates, Offices and Commissions »