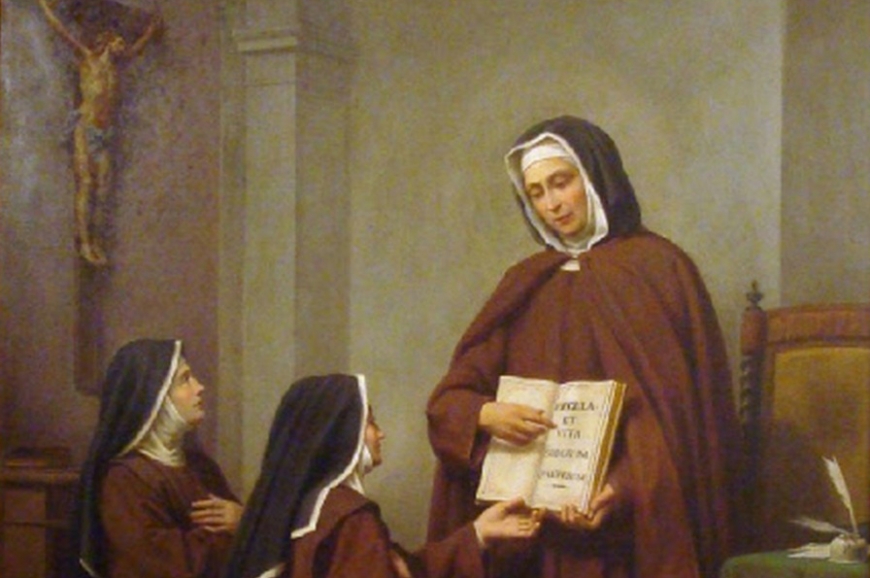 Letter of the General Minister
to the Capuchin Poor Clare Sisters

May the Lord give you peace!

In the year 2017 Br. Mauro Jöhri sent you the letter “Two Faces of the Same Charism”[1]. I now follow this letter by offering you some thoughts and animating you toward taking new steps on the way of communion and of the participation which you are taking in relation to the revision of your Constitutions.

The valuable gift which Pope Francis gave you with the Apostolic Constitution “Vultum Dei Quaerere” and its rules of application contained in the instruction “Cor Orans” of the Congregation for the Consecrated Life brought about a fine movement of reflection and sharing among you. It is also encouraging to see how the process of participation has resonated beginning with the International Meeting of Capuchin Sisters, which took place in Mexico in 2016, and the echoes of the proposals of the International Commission of sisters during the preparatory phase for the revision of the constitutional text. In a creative way, with your differences and abilities, and also with certain difficulties in some regions, you have been able to develop the proposed themes as ongoing formation – a starting point for what will be the revision of the text proper.

It is not superfluous to recall that it is not a matter of making a "reform" of the Constitutions, but a "revision" of them; which implies that the current post-conciliar text will substantially remain in its structure and identity, which continues to be valid and a source of inspiration, but in which the theological accents and canonical changes of the new ecclesial documents for contemplatives will be inserted, and the echoes of the consultative work that took place among you which received the greatest support will be emphasized.

1. The Meaning of the Constitutions: Identity, Actualization, Communion

The Constitutions are the fundamental code for protecting more faithfully a particular vocation and identity.[2] Their purpose is to help in the observance of the Rule according to the intentions of Saint Clare and the guidelines of the Church, applying and fulfilling precepts for the different circumstances of life. They are an "effective and timely guide to help us to be more permeated by the spirit of the holy Founders Francis and Clare and the spirit of our Order".[3]

But, in addition to outlining identity, the Constitutions indicate the criteria and the right way to implement ideals for the reality of our times in its different contexts. Effectively, "The perennial spirit of the Order of the Poor Sisters is maintained in them and is adapted to the conditions of our time".[4] They are a stimulus and a concrete guide for an adequate continuous renewal of the sisters and of the communities.[5]

They establish an explicit and practical plan of communion between the sisters scattered throughout the world and who live in different cultural contexts, giving unity and cohesion to the Order, because they constitute "an excellent way to foster unity of spirit among the monasteries that are committed to following the same Rule in so many different regions".[6]

In the process of revising the constitutional text it will be useful not to lose sight of this triple purpose which constitutes its deepest meaning: the Constitutions are a text to protect identity, and to foster both an adequate realization and a means of unity in diversity.

2. Second Phase: Respectful Revision and Enrichment of the Text

In harmony with the project approved at the 2016 International Meeting, an attempt was made to develop an itinerary to revitalize the way of living the charism. This is why the first phase was broadly dedicated to reflection and dialog about the different points of your life as Poor Clare Sisters that, based on experience, require a reformulation. This stage, which began in October of 2017 and will end in October of 2019, sought to animate the sisters to reflect with full participation in the ways that the Federations believed were most suitable. Thus, with the contributions and reflections offered by the sisters, there is rich material that will serve for the development of the next phase.

The second phase will be the actual revision of the constitutional text with the aim of offering a proposal for modification based on two basic perspectives. In the first place, respect for the current text in its fundamental structure, insomuch as every phrase and every word has a value, a reflection and a story behind it.

And secondly, an enrichment of the text, taking into particular consideration the new ecclesial documents, inserted in a way that does not break the internal and structural harmony of the text itself. This is not a mere adaptation of the text to the new canonical provisions; What is proposed instead is a revision that is motivated and profound, respectful and enriching.

It is easy to see that this will not be an easy task. This is why the sisters of the International Commission, who represent the regions and Federations of the entire Order, will be accompanied by a group of experts, who will offer guiding service in the various specific disciplines. The Sisters' Commission, together with the experts who collaborate with them, will work on the deep development of the proposed changes seeking the widest possible consensus and basing them on the documents and the reflections of the sisters. Thus it will be possible to formulate proposals for the revision of each chapter of the Constitutions, in the most correct and consistent way possible, proposals which will then be sent to all the monasteries to be studied.

Each Federation or Association will have the right to send a representative to the International Commission, in order to make communication easier and to stimulate the work. Clearly, those Federations that agree to work together, especially of the same country or region, will be free to send one sister in common.

I present to you here the specialist brothers I have appointed to accompany the development of this second phase, who will collaborate with the sisters of the Commission in a fraternal spirit:

This work of revising the Constitutions is an excellent way of experiencing the constitutive "synodality" of the Church.[7] The word “synod” etymologically means “common path”, “journey made together”, and in the tradition refers to the itinerary that the members of the People of God travel together. From the earliest centuries, with this word, the assemblies convoked at different levels (diocesan, provincial or regional, patriarchal, universal) are specifically designated to discern – in light of the Word of God and by listening to the Holy Spirit – the doctrinal, liturgical, canonical and pastoral questions which arise periodically. Not long ago, Pope Francis stated that “ […the] way of synodality [is] where we find the pathway that God expects from the Church of the third millennium”[8], because “to walk together is the constitutive way of the Church; the figure that enables us to interpret reality with the eyes and heart of God; the condition for following the Lord Jesus and being servants of life in this wounded time. The breath and the pace of the Synod show what we are, and the dynamism of communion that animates our decisions”.[9]

This journey that you are making in the revision of your fundamental text, full of joy and hope, but not without challenges, must be animated by a profound spirituality of communion and characterized by a particular contemplative style. A journey of community, federation and international commission meetings, etc., always carried out in a climate of prayer, reflection and internalized discernment, for it is only in this way that it will be the source of a true renewal.

Communion, first of all, is an encounter with the triune God, a mystery of communion. For this reason it is not a question of multiplying meetings to the detriment of a life of prayer, but of fostering meaningful spaces at different levels – spiritually motivated, prepared and chosen well – without putting at risk each individual community’s rhythm of life.

From an overall reading of the Constitution "Vultum Dei Quaerere" two elements that are repeated immediately stand out, and could be expressed as the melody of a refrain: discernment and dialogue, against the background of a life dedicated to contemplative prayer. I invite you to continue to commit yourselves to this "synodality" through which the whole Church is moving, putting into practice this discernment and this dialogue, characterized by the profound wisdom of people who make in their lives a lot of room to be touched by the mystery of God.

Keeping all these considerations in mind, I convoke the delegates of the Federations who form the International Commission for the revision of the Constitutions, together with the appointed consultants, to begin the work of the second phase of the process by meeting in Rome in the early months of 2020, so that, without haste but also without delay, they may continue this rich common journey.

And I call upon all the Capuchin Poor Clare sisters, in their different places and situations, in their contexts and cultures, to look forward to what the Commission will provide for the taking of new steps in communion; to receive the grace of the revision of the text which defines your identity, a grace that makes real the way of living your identity and that unites in the same spirit the monasteries of the whole world.

May Saint Clare intercede for you, that "the Lord Himself, Who has given a good beginning, may give the increase and may also give final perseverance.”[10]

[7] Cf. International Theological Commission, Synodality in the Life and Mission of the Church, March 2, 2018.

[9] Pope Francis, Address at the Opening of the 70th General Assembly of the Italian Episcopal Conference, May 22, 2017.

More in this category: « Pilgrimage to the Tomb of Saint Lawrence Positio sub secreto »