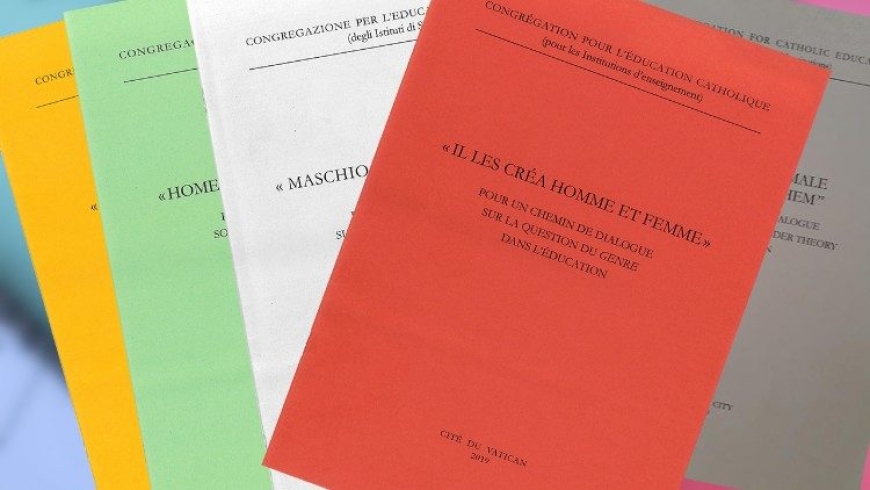 “Male and Female He Created Them: Towards a path of dialogue on the question of gender theory in education”

Vatican document on gender: Yes to dialogue, no to ideology

The Congregation for Catholic Education has published “Male and Female He Created Them: Towards a path of dialogue on the question of gender theory in education”. The new document is intended as an instrument to help guide Catholic contributions to the ongoing debate about human sexuality, and to address the challenges that emerge from gender ideology.

The objective of the document — entitled "Male and Female He Created Them: Towards a path of dialogue on the question of gender in education” — is to support those engaged in the education of the younger generations to address “methodically”, in light of the broader horizon of education in love, the issues most debated today on human sexuality.

In particular, it is addressed to Catholic schools and to those who, inspired by a Christian vision, work in other schools; to parents, students, and staff; but also to bishops, priests, and religious, as well as ecclesial movements and associations of the faithful. The Congregation for Catholic Education, which prepared the text, speaks of “an educational crisis”, in particular on the themes of affectivity and sexuality, in the face of “challenges emerging from varying forms of an ideology that is given the general name ‘gender theory’, which 'denies the difference and reciprocity in nature of a man and a woman',” and considers them as “merely the product of historical and cultural conditioning.” Identity would then “become the choice of the individual, one which can also change over time “. The text speaks of an anthropological disorientation that characterizes the cultural climate of our time, contributing to “the destabilization of the family.” Quoting Amoris laetitia, the document says that, among other things, this ideology “leads to educational programmes and legislative enactments that promote a personal identity and emotional intimacy radically separated from the biological difference between male and female”. This is the context of the new document, which aims to promote a methodology “based on three guiding principles” of listening, reasoning, and proposing.