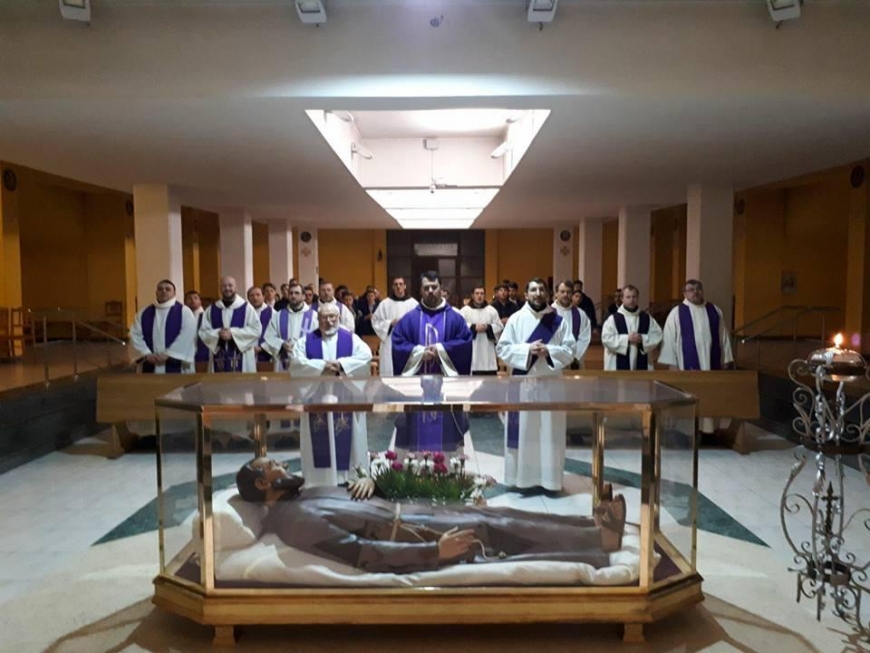 The Capuchins in Romania

A brief history and the Custody today

On the occasion of Pope Francis’s visit to Romania, we would like to share with you the work the Capuchin friars are doing in this country.

The first Capuchin friars arrived in the territory that is now Romania in 1725. They were from the Province of Austria and had been called by the Catholic bishop of the city of Oradea. There they built a church dedicated to the Visitation of the Blessed Virgin Mary and a friary which then became the center of a Capuchin presence that spread out through the region. From there five other friaries were founded. The friary in Oradea lasted until the communist suppression in 1948 and the death of the last Capuchin friar – who remained at his post as a diocesan priest – in 1974.

Constanța, an ancient port on the Black Sea, is another historical presence of the Capuchins, where some of the Capuchins driven out of Georgia by the Tsarist army settled in 1860. To these friars a parish was entrusted, a parish that had been opened by the ecclesiastical authorities for the care of the many Italians and Germans working on the Turkish project for the modernization of the port. After the Russo-Turkish war of 1878, the area of Constanța became part of Romania and the ecclesiastical authorities decided to entrust the pastoral care of the area to the Passionists. So the Capuchin friars, after being present for eighteen years, moved to other friaries of the Order in Bulgaria.

The beatification of the Capuchin friar Jeremiah of Wallachia (1556-1625) by Pope St. John Paul II on October 30, 1983 was the occasion for the friars to return to Romania. At that time the bishop of Iași, Most Rev. Petru Gherghel, asked the General Minister, Br. Flavio Roberto Carraro, to send a group of friars to bring Capuchin-Franciscan spirituality to the diocese of the new Blessed, the first in the history of the Catholic Church in Romania. The General Minister turned over the request to the Province of Naples, Italy, where Blessed Jeremiah had spent his religious life. The invitation was accepted and the first two friars, Br. Ubaldo Oliviero and Br. Vittorio Clemente, arrived in Romania at the beginning of September 1992 and set themselves up in the town of Onești where there was already a Capuchin present, Br. Mario Querini of the Province of Rome, who had come for ecumenical ministry. In Onești there was also present a pastor, Fr. Eduard Sechel, who had an enthusiastic devotion to Blessed Jeremiah and had already begun to build a shrine to him.

September 24, 1992 marks the official beginning of the current Capuchin presence in Romania. The friars went to work as soon as they arrived and on October 30 of the same year opened a high school seminary which is still operating today. In 1995, next to the shrine of Blessed Jeremiah, the construction of the first friary began. This structure was opened in 2000 as the seat of the Custody and seminary, and is now a Catholic high school open to the all the young people of the area, Catholics and others, including the Orthodox.

The Capuchin presence developed with the opening of other friaries: Borzeşti (postulancy, now closed), Nehoiu (novitiate, today returned to the diocese of Bucharest, as it is also a parish), and Roman (student house).

Creating formation structures for the local aspirants, the General Minister of the time, Br. John Corriveau, official erected the Custody of Romania on May 8, 2005 and appointed Br. Ubaldo Oliviero as the first custos. It was Br. Ubaldo who expressed the desire of Catholic Romanians to have in their own country the relics of Blessed Jeremiah. Departing from Naples on May 8, 2008, these much desired mortal remains, after a triumphal pilgrimage through the territory of Romania, arrived in Onești on May 31 and were placed in the crypt of the shrine. It was an event honored by the presence of many bishops, priests, friars and other religious, and a great crowd of the faithful.

During the first ordinary chapter of the same year, 2008, the first Romanian custos was elected, Br. Leon Budau. (He was also reelected in 2011.) New friaries followed: Sighetu Marmației and Târgu Lăpuș in the northern part of the country (Byzantine rite) and in Slobozia in the diocese of Bucharest.

As of the end of 2018, the friars of the Custody live in and carry out their apostolate from five friaries:

Onești. Here the fraternity is made up of eleven friars, who serve in the curia of the Custody, in the care of the shrine, as teachers in the high school and school summer camps, in service to the poor (soup kitchen and public showers), ecumenical activities, and assistance to the OFS.

Roman. This fraternity has thirteen friars, ten of whom are students. Beyond the main work of study, the friars assist in the parish and wherever their presence is requested, as well as in groups that support children and young people who were previously in the orphanage, in school summer camps, and assistance to the OFS. Further, a part of the friary was recently renovated for formerly institutionalized young people, who, having become adults, no longer have the support of state structures and who are looking for work and to make a future and families for themselves. This year, on June 24, five of our confreres were ordained priests by the diocesan bishop, Most Rev. Petru Gherghel.

Slobozia. This is a fraternity of three friars. Their main activity is the pastoral care of a parish for the small Catholic community of the town. They also minister in another community about sixty kilometers away.

Sighetu Marmației. Here there are also three friars. Their main activity is a kind of youth ministry in which the young people come together to study, play, pray, and be together. It is a way to assist the less fortunate, especially those coming from the former orphanages of the city. Over time, a good group of volunteers has grown up around the friars and the various activities in this area. Beyond this, the friars serve in the local Byzantine-rite parish and, on request, provide spiritual assistance to sisters and the OFS. They also take care of the public showers of the city.

The city of Sighetu is one of the symbols of the persecution suffered by both rites of the Romanian Catholic Church; it was in its prisons that the elite of Romania, ecclesiastics, politicians, and others were held. It was also there that four bishops died during the years 1950 to 1955 after being imprisoned for their faith. One of them, Blessed Anton Durcovici, was bishop of Iaşi. The other three, the Greek Catholic bishops Valeriu Traian Frențiu, Ioan Suciu, and Tit Liviu Chinezu, will also be beatified by Pope Francis, together with four other Greek Catholic bishops, this coming June 2 at the conclusion of his visit to Romania.

Târgu Lăpuș. Here there are two friars present. Their main activity is assisting the local Byzantine rite parish. They also provide spiritual direction to the faithful who come as penitents to the ‘monastery’ – in Eastern spirituality monasteries have a special place in the devotion of the faithful. Our ‘monastery’ is a little outside of the city like the first friaries of our Capuchin reform.

Apart from the friars that live and work in Romania, other friars of the Custody carry out their apostolate in assistance to other circumscriptions of the Order. There are five friars in houses depending on the General Minister: the Historical Institute, Consolazione in Rome, Frascati, and Loreto. There are five friars in the mother province of Naples, plus another five that chose, at the time of the erection of the Custody, to become members there. There are two friars in the Province of Emilia-Romagna, one in the Delegation of Greece, and another in the Delegation of Turkey. At this time, March to May 2019, another friar is in the Custody of Mozambique for a missionary experience.

Apart from the general Franciscan charism, we have a specific charism of ecumenism, which comes out of how Blessed Jeremiah of Wallachia was rediscovered, his message, and finally, even his mortal remains.

At the beginning of the last century, that is in the years 1905 and 1915, the existence of this Romanian Capuchin friar was brought to light and made known in academic circles by two Orthodox professors, George Sion and Nicolae Iorga. A Greek Catholic priest, Ioan Bolan (the future bishop and martyr, who will be beatified by Pope Francis this June 2) wrote a biography that was widely read and appreciated during the period between the world wars, Un sfrant pribeag roman – A Holy Romanian Pilgrim. The Greek Catholic bishop of Oradea, Valeriu Traian Frentiu (martyr, to be beatified by Pope Francis along with the other six bishops on June 2) in 1926 approved the public cult of Servant of God Jeremiah in his eparchy. During the same period as well as soon after World War II, the whole body of the Greek Catholic bishops asked the Holy See and the General Minister of the Capuchins, Br. Clement of Milwaukee, to repatriate the Servant of God’s relics, “in order to have also a Romanian saint.” However, his place of burial was no longer known. Finally, in 1947, another erudite Orthodox, Grigore Manoilescu, discovered the tomb. Unfortunately, the historical conditions at the time prevented the repatriation. [As noted above, it was in 2008 that the return of the remains of Blessed Jeremiah to Romania was finally accomplished. – trans.]

We keep in mind two connected threads in our ecumenical openness: that of being sons of St. Francis and heirs of Blessed Jeremiah and that of the beatification of the seven bishop martyrs. These oblige us to not forget nor pass over our ecumenical charism, even if the obstacles have seemed to increase in recent times.

The Pope’s invitation, Let’s walk together – the logo of the visit – is more current than ever for us Romanian Capuchin friars.