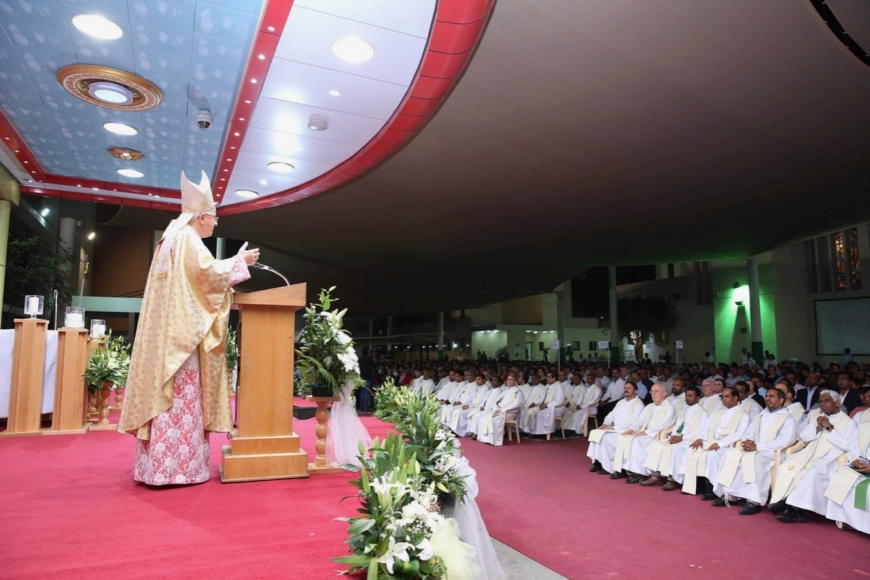 Arab Emirates, Bishop Hinder: “This is how Christians and Muslims await the Pope”

Expectations and prospects of both the Catholic and the Islamic community in view of the international interreligious meeting in which Francis will participate. An interview with the Apostolic Vicar of South Arabia.

Accepting the twofold invitation - from the local Catholic Church and Sheikh Mohammed bin Zayed Al Nahyan, Crown Prince of Abu Dhabi - Pope Francis, from 3 to 5 February, will be in Abu Dhabi, United Arab Emirates, to participate in an international interreligious meeting dedicated to “universal brotherhood” promoted by the Muslims Council of Elders, an international organization presided over by the great imam of the University of al-Azar in Cairo.

The Pope will be welcomed by the Swiss Bishop Paul Hinder: 76 years old, he belongs to the Order of Friars Minor Capuchin and since 2011 he has been the Apostolic Vicar of South Arabia, which includes Yemen, Oman and the United Arab Emirates, a federation of seven emirates inhabited by 9,500,000 people. The Catholic faithful are about one million, (mainly working in construction sites, school, services and domestic work field), they come from over one hundred countries: mainly the Philippines, India and other Asian countries. There is also a substantial number of Arabic-speaking faithful (mostly from Lebanon, Syria, Jordan).

In this conversation with Vatican Insider, Bishop Hinder, who resides in Abu Dhabi, tells of the expectations of this Church in the Gulf, which he calls “of migrants and for migrants”. 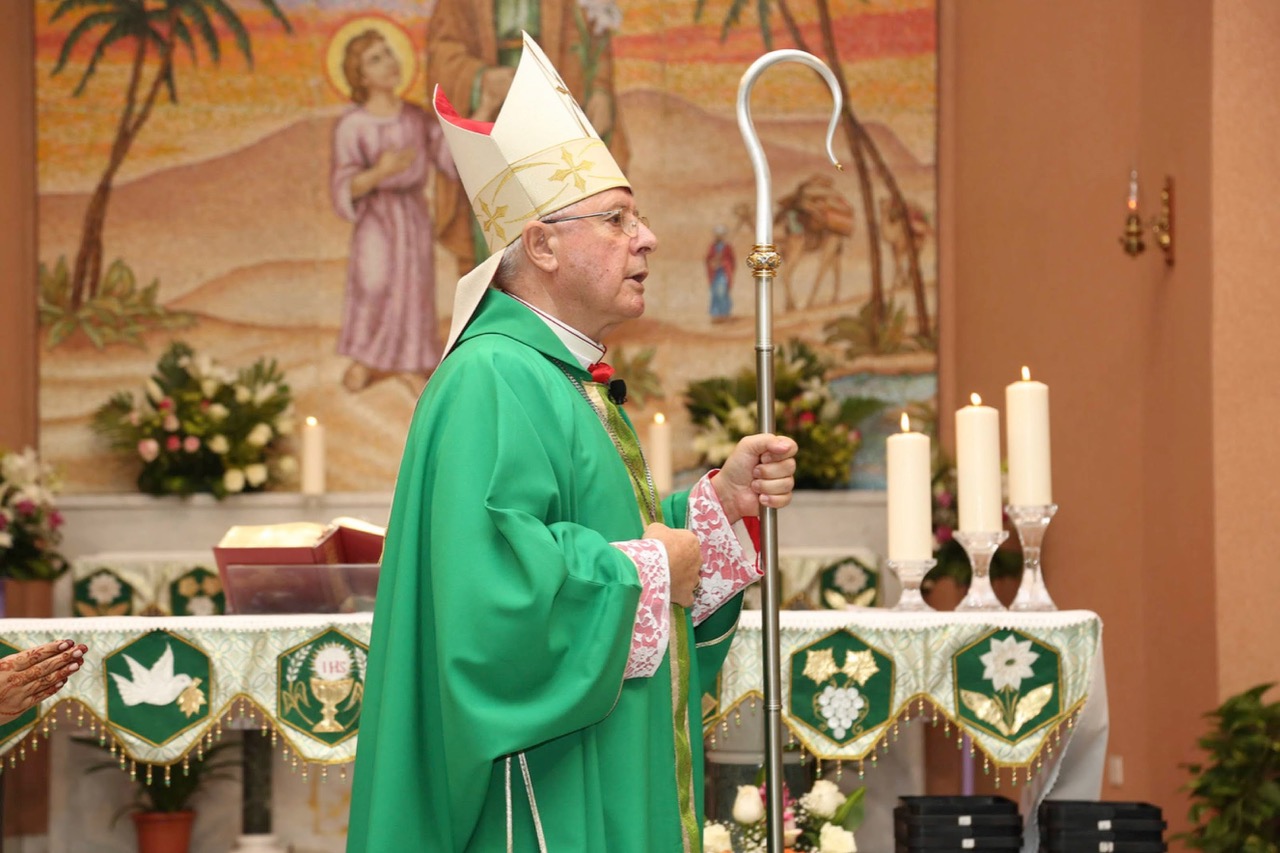 With what feelings is the Catholic community of the Emirates awaiting Pope Francis?

“The local Catholics are enthusiastic: together with the joy of being with the Holy Father, being confirmed in faith and receiving his blessing, I see in them – as Christians who live in a Muslim context and far from their homeland - the expectation of words of encouragement and the desire that their existence be recognized. It is not uncommon for our faithful to have the impression that the rest of the world does not even know that there are Catholic communities in the Emirates; these are communities, I would like to stress, that are very lively: being a Church of migrants gives us a special and perhaps prophetic character. We can bear witness on how to live the faith with courage in a non-Christian society: local Catholics do not hide their religious affiliation, nor are they afraid to show what they are and what they believe in. They are respectful of the Islamic faith, but not afraid of it. Theirs is a mild courage. I think it will be a nice experience for the Pope to get to know this Church up close. For me this visit represents an encouragement to move forward with confidence as well as an acknowledgment of the vitality of our communities. I hope that the presence of the Pope will allow the world and the faithful of other countries to discover our existence and help to draw everyone's attention to the dramatic conflict that is severely prostrating the Yemeni people, who need our prayers and our concrete support”.

What about the feelings of the Muslim people?

“The Muslims await the Pope and look forward to this visit with much interest and curiosity. For several years now I've noticed that Pope Francis has gathered great sympathy and is considered - in a certain way - also a friend. Very many Muslims would also like to be present at the mass presided over by the Pope to understand what it is about. Participation will not be limited to Christians alone but certainly they will be given priority both because Muslims can meet the Pope at other times and because the Eucharistic celebration is not a show. We do however appreciate the great interest shown by people of the Islamic faith in the mass”.

Is interreligious dialogue a theme felt in the Emirates?

“First of all I want to say that I consider dialogue between religions one of the decisive factors for the development of the world. Dialogue with Islam is a path that cannot be avoided: I think it is necessary though it is not always easy. In my vicariate there are congresses organized by Muslim institutions and events involving all the Christian Churches and in which the Holy See has an important role through the Pontifical Council for Interreligious Dialogue. The Arab Emirates show sincere openness to dialogue with other religions. In view of the Pope's visit, several days ago I had a meeting with the Crown Prince of Abu Dhabi, Sheikh Mohammed bin Zayed Al Nahyan: I would say that it was an excellent meeting: the climate was very serene. I think that by hosting the international interreligious meeting on universal fraternity, the government also intends to show the world its openness and tolerance”.

“This is an encouraging sign. I would say that in the Emirates this tolerance does exists, not only towards the Catholic community but also towards the faithful of other religions. Of course, this is a Muslim society, Islam is the state religion. We have limits: worshiping must take place only in designated places. In the same way, religious assemblies are allowed only within buildings made available to us for that purpose. Within these limits we are free to carry out our pastoral work. We are tolerated, but also helped: for example, we built the nine churches in the Emirates on land that was donated or rented to us for a symbolic amount by the state. We were also greatly helped in the organization of the Pope's visit: all the logistical part is in the hands of the government, which also wanted to take on the organization of the mass (including the construction of the altar)”.

Do you think that the theme chosen for the international interreligious meeting in which Pope Francis will participate, that of universal brotherhood, can prove fruitful for dialogue between Christians and Muslims?

“I think so. In recent years I have noticed that Muslim authorities often call me "brother ": it means that they see in me, as in other Catholics, not only the differences that divide us but also a dimension that unites us. At least in this part of society we are accepted and considered brothers. I think this is a good path to take even if we Christians have a concept of brotherhood that is different from that present in the Koran and in the Islamic world”.

What fruits do you imagine the Pope's visit and his participation in the inter-religious meeting will bring?

“Difficult to answer: surely I can say that the Pope's visit constitutes an important step forward in the dialogue between Christians and Muslims and contributes significantly to mutual understanding. A first immediate fruit is the serene atmosphere that we are breathing in the Emirates in these days. Recently also some Muslim authorities have come to me to present initiatives and proposals for collaboration (for example in the field of education) so that the visit of the Pope does not remain an isolated episode but has concrete consequences on the daily life of the population. I consider it a very encouraging signal, and not only for the Arab Emirates”.

More in this category: « The United Arab Emirates and the Pope’s Visit American bishop in Nicaragua creates oasis of peace in nation of turmoil »