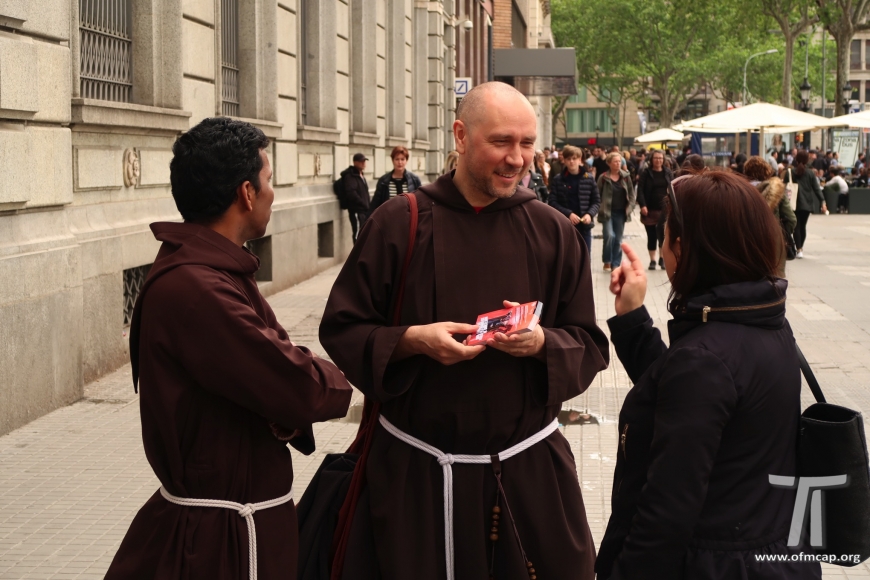 Barcelona (Spain). From May 4 to 6, 2018, about thirty friars from different European countries met in Barcelona to live a brief fraternal mission together with the confreres of the Province of Catalonia, entitled "Sant Francesc visita els carrers de Barcelona" (Saint Francis visits the streets of Barcelona). We had with us the relic of a cloak that St. Francis of Assisi had given to St. Elizabeth of Hungary, then passed to St. Louis of France and, after various vicissitudes, came to the French Capuchin friars, who now preserve it their friary in Paris.

On Friday morning, the first act of the mission was the pilgrimage to the sanctuary of Montserrat to entrust the mission to the Virgin Mary. In the afternoon we went to Piazza Catalunya, the main square of the city, where we set up a stand. Some friars were at the stand to welcome those who were curious to know about this initiative and provide information regarding the mission. Others, in pairs, went to the neighboring streets (including the Ramblas), to meet the people, especially young people, because in the evening we had organized a Franciscan vigil specifically for them, in collaboration with the diocesan youth ministry service. This "going" was not only an invitation, but also a way of evangelizing.

At 9 pm we met in the church of Sant Jaume where, in the presence of the relic, we had a moment of praise and worship along with a Eucharistic adoration. Subsequently, we went out in procession with the relic in the streets of the city center accompanied by "sister rain", following the crucifix of S. Damiano, singing the praises of the Lord. This simple yet very significant procession aroused the curiosity of many passers-by: there were those who on seeing us made the sign of the cross, others who showed their appreciation with different gestures, and especially those who immortalized us taking a lot of photos.

We then made two particularly significant stations: The first, in the square of the church entrusted to the community of St. Egidio, where we recalled the meeting of Francis with the leper and his love for the poor and the second, at the residence of the archbishop, where the archbishop of Barcelona, Cardinal Juan José Omella, was waiting for us. With him we remembered the gesture of Bishop Guido, who had covered Francis with his mantle after he had stripped himself in the Piazza of Assisi. After the warm welcome and blessing of the cardinal, we resumed our journey to the church of St. Anne, where everyone was able to venerate the mantle of St. Francis.

The next day, Saturday, we set up our Franciscan booth near the Capuchin church of Pompeia, because in the evening, in this church, we had organized a Franciscan prayer for peace. In the afternoon, always two by two, we went around the streets of the neighborhood to meet people and evangelize. The Franciscan vigil in the church of Pompeia was animated by Fr Hayden Williams OFMCap, who with great passion invited those present to welcome the gift of reconciliation with God, to become reconcilers around us. On Sunday morning, the Mass presided by our Vicar General, Br. Štefan Kožuh, concluded the mission.

Before Mass we gathered to share the most touching moments of these days. We all confessed the joy of having lived a wonderful experience of international fraternity. Br. Pio Murat, responsible for the Project for Europe, underlined how fraternity is the first force of the Capuchin mission.

And now, some "little flowers" of the mission: A young man, who right at the outset declares himself an atheist and who is not interested in talking to the friars at all, a little later opens up and ends up praying the ‘Our Father’ and asks for a blessing. A young man with hearing impairment, facing the relic of St. Francis, asks with tenderness how to venerate it and how to be able to pray to be healed by God. A group of young people stop a friar and ask if they can take a photo with him, because they are participating in a contest entitled: "A selfie with the strangest person you meet on the street".

A big thank you to the Lord for this wonderful experience of international fraternal mission and to the friars of Catalonia for their splendid welcome.