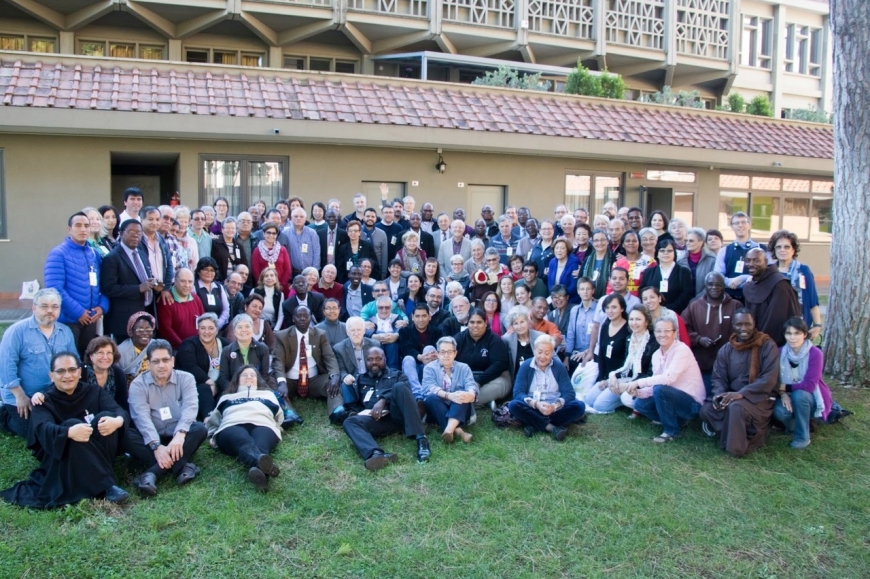 Rome. The XV Ordinary General Chapter of the Secular Franciscan Order took place at the Seraphicum in Rome from November 4 to 12, 2017. There were 124 participants from 75 nations present between capitulars, observers, speakers, and others invited and those assisting. As a true international fraternity the capitulars celebrated the gift of the Secular Franciscan vocation to rebuild the Church (Const. 100.1) and to build a more just and fraternal world (Const. 20.2). Cardinal Pietro Parolin, Vatican Secretary of State, presided at the opening Eucharist, while the General Ministers, Br. Michael Perry, OFM, Br. Marco Tasca, OFM Conv., and Br. Mauro Jöhri, OFM Cap., and the General Assistants presided at the other celebrations. The proclamation of the Word of God, the prayers, and the singing made everyone feel truly members of one body – the Body of Christ!

The work of the Chapter began with the presentation and discussion of the various reports of the General Minister and of the CIOFS Presidency, of the General Treasurer, and of the Conference of General Spiritual Assistants (CAS). The central theme of the Chapter was: “As You sent me into the world, so I have sent them into the world.” (John 17:18) This theme was presented by Michel Versteegh, OFS (Netherlands), who shared his experience of faith lived in family, parish, in the OFS fraternity, and in his work as a heart surgeon. His talk highlighted the fact that his work and professional training (cf. Const. 20.2) are directly related to his identity and mission as a Secular Franciscan.

One of the most awaited moments was the presentation, analysis, and discussion of the instrumentum laboris titled, “How should an Order like the OFS being managed at all its levels?” The group work and the discussion following in plenary session were decisive for the results of the Chapter, together with the work of the commission for the final document. At various times the capitulars were called to develop their sense of belonging and to work together to support the life and mission of the OFS fraternities at all levels. Regarding the life and possibilities for Franciscan Youth, the importance of the appointment of a fraternal animator and the promotion of a double belonging to the OFS and Franciscan Youth were both emphasized.

During the Chapter, the General Minister announced the calling of the Jubilee Year (June 24, 2018 – June 24, 2019), which will commemorate the fortieth anniversary of the Rule of the OFS approved by Pope Blessed Paul VI on June 24, 1978 with the letter Seraphicus Patriarcha. In the middle of the schedule, the capitulars traveled to Subiaco to visit to the abbeys of Ss. Benedict and Scholastica, where St. Francis also spent some months, and where the capitulars also celebrated the Eucharist.

Two round table discussions presented both practical examples of living the OFS Rule in the world and topics concerning the future administration of the Order. The capitulars were edified to hear a presentation of the lives of the two OFS blesseds: Lucien Botovasoa and Franz Jägerstätter, as well as the explanation of the process of the postulation of saints. Fraternal evening events were also held for sharing the joy and cultural diversity with the exchanging of gifts from the various countries.

In the final session, the capitulars approved various resolutions, the fruit of the work of the Chapter, as well as the budget for the next three years. After the concluding Eucharist, the capitulars shared a final fraternal evening in order to give thanks and bid each other farewell.