On June 16, 2017, Pope Francis authorized the Congregation for the Causes of Saints to issue the decree super virtutibus for Giacomo of Balduina, priest and confessor, member of the Province of the Holy Cross (Veneto-Friuli Venezia Giulia-Trentino), who died at Lourdes and is buried there.

The Servant of God was born, the eighth of the ten children, in Balduina di San Urbano (Italian province of Padua), on August 2, 1900 and was baptized three days later with the names Beniamino Angelo. From 1906 to 1909 he attended the first three grades of elementary school. After this, from 1910-1914, he studied in a professional school in Lendinara.

Impressed by the friar questors, it was at Lendinara that the young Beniamino began to visit the friary of the Capuchins. Under the guidance of the pastor, on October 13, 1917 he entered the Seraphic Seminary of the Capuchins in Rovigo. There, at seventeen years old, he found himself in a group of eleven year-olds. When World War I broke out he was called into the army, where he remained until 1921. Once discharged, after a brief visit to his family, he was sent to the Seraphic Seminary in Verona for further studies. Beniamino then entered the novitiate at Bassano del Grappa on September 28, 1922 was given the name Brother Giacomo of Balduina. After he made his temporary profession on September 29, 1923, the novice master declared to his mother that Br. Giacomo knew nothing ‘except to pray.’ It was during his second year of theology, however, that Br. Giacomo began to feel the first symptoms of the disease that would be with him until his death: encephalitis lethargica.

This medical situation raised serious doubts about proceeding towards priestly ordination. The superiors, however, fearing a premature death, decided to dispense Br. Giacomo from the last year of theology. Thus, on July 21, 1929, in the church of St. Nicholas of Tolentino in Venice, the Servant of God was ordained priest by Cardinal Pietro La Fontaine, Patriarch of Venice (himself Servant of God), offering his suffering and mortification for the salvation of souls, for priestly vocations, and for the sanctification of priests.

After a brief stay in Capodistria, on November 28, 1931, Fr. Giacomo arrived in Udine where he soon underwent a thorough examination. The diagnosis was grave: postencephalitic parkinsonism. The prognosis was difficult as well: only a few years to live. Even though Fr. Giacomo’s health declined steadily from this time forward, this did not keep him from living the Rule faithfully. His cell on the first floor of the friary was set up to serve as a confessional where he was granted to receive penitents.

Knowing how sick Fr. Giacomo was, Msgr. Pietro Baldassi, a priest who was very active in UNITALSI (Unione Nazionale Italiana Trasporto Ammalati a Lourdes e Santuari Internazionali, an association that assists the sick with transport to Lourdes for pilgrimage), invited him to make a pilgrimage to Lourdes. On July 19, 1948 the Servant of God left for the journey on the UNITALSI train, reaching Lourdes after thirty-five hours of travel, after which he was not able to go to the Grotto immediately as he had wished. By the next evening his condition had worsened and he died on July 21. The funeral was held in the presence of many pilgrims and priests. Fr. Giacomo’s remains were entombed in a corner of the cemetery for foreigners, but later translated, on October 15, 1949, to a more dignified grave. His tomb is always adorned with fresh flowers, candles, and ex-voto. 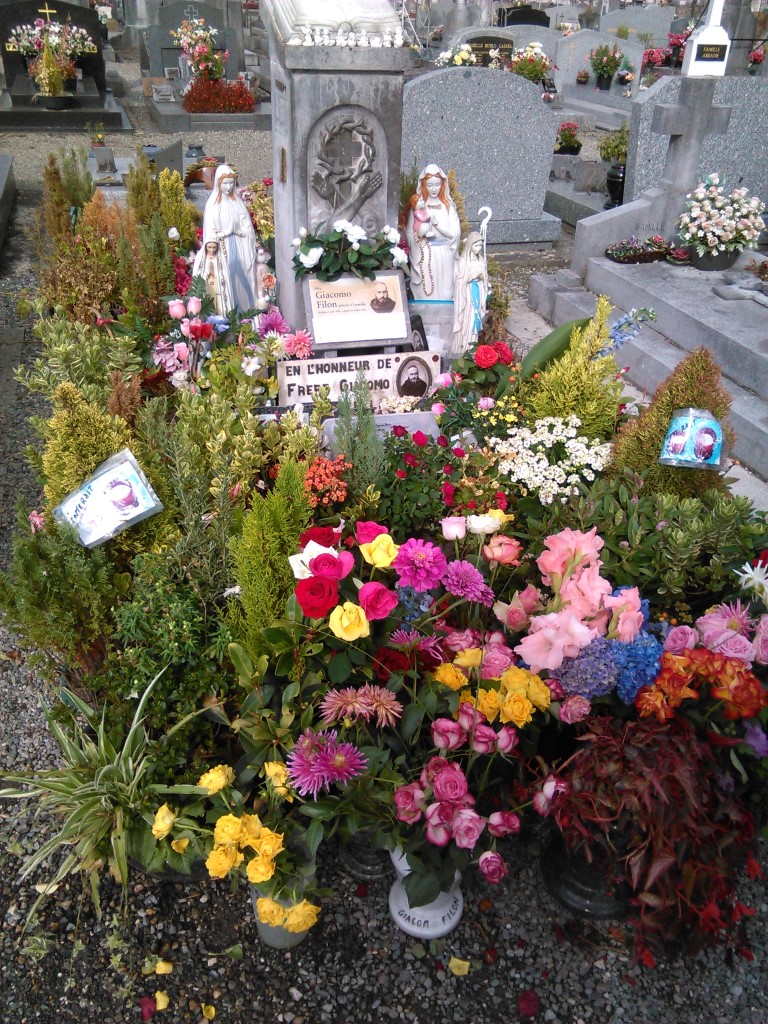 Last modified on Wednesday, 21 June 2017 08:37
More in this category: « Reading of the decree super virtutibus of Ven. M. Costanza Panas, Capuchin Poor Clare Eighth Centenary of the Birth of St. Bonaventure of Bagnoregio »