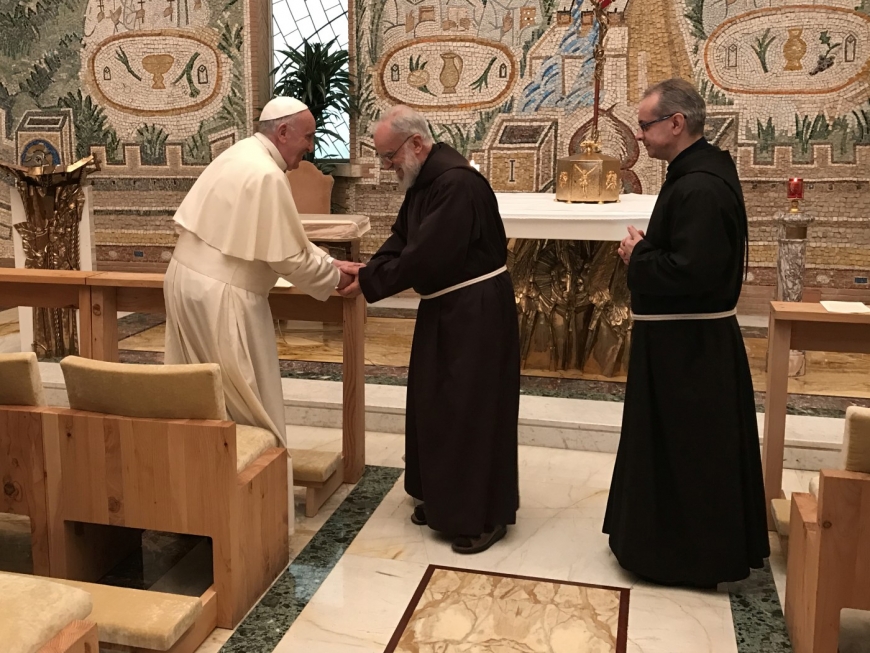 The custom of having the general procurators of the four mendicant orders (Franciscans, Dominicans, Carmelites, and Augustinians) take turns preaching before the papal court, on the Sundays of Advent and Lent, goes back to the Middle Ages. The office of papal preacher as a permanent position, however, goes back to the pontificate of Paul IV (1555-1559); over the years various orders were able to offer someone for this assignment. Pope Benedict XIV, in his letter Inclytum Fratrum Minorum (1743), reserved this title in an exclusive way to members of the Order of Friars Minor Capuchin. In 1980 Pope John Paul II appointed the theologian Br. Raniero Cantalamessa OFM Cap., as Apostolic Preacher. Currently the sermons are held on each Friday of Lent and Advent in the Redemptoris Mater chapel in the Apostolic Palace.

This year is the twenty-sixth time that Br. Raniero has preached for the Holy Father and the Papal Household. The title of his preaching this year was, “Let us drink, the sober intoxication of the Spirit.”

“The major innovation in theology and in the life of the Church after the Council has a specific name: the Holy Spirit. […] It has given rise to the present theological current that is precisely named the ‘Theology of the Third Article.’ [that is, the third article of the Creed, on the Holy Spirit] I do not think that such a current aims to substitute itself for traditional theology (and it would be mistake if it did); rather it is meant to come alongside of it and reinvigorate it. It proposes to make the Holy Spirit not only the object of one treatise, pneumatology, but also the atmosphere, so to speak, in which the whole life of the Church and all theological research unfolds—for the Holy Spirit is the ‘light of dogmas,’ as an ancient Church Father described him. […] With this in view, I would like to offer reflections on some aspects of the Holy Spirit’s action in the three meditations for Advent, beginning precisely with the third article of the creed that pertains to him.” (from the first Advent sermon for 2016, “I believe in the Holy Spirit.”)

See the photo galleries of Advent 2016:

More in this category: « Statistics of the Order of Friars Minor Capuchin Subscribe to BICI, because… »