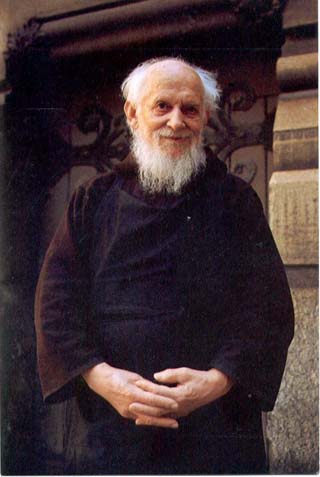 Br. Cecilio Maria of Costa Serina, founder of the St. Francis Charity for the Poor in Milan (Opera San Francesco per i Poveri), Venerable.

On the afternoon of March 6, 2018 Pope Francis received in audience the Prefect of the Congregation for the Causes of Saints, Cardinal Angelo Amato, and authorized him to promulgate the decree super virtutibus of the Servant of God Cecilio Maria Cortinovis of Costa Serina, founder of the St. Francis Charities for the Poor in Milan.

The Servant of God was born in Nespello, a neighborhood of Costa Serina (Italian civil province of Bergamo) on November 7, 1885 to Lorenzo and Angela Gherardi, the seventh of nine children, and was baptized the next day with the names Pietro Antonio. While still an adolescent he worked in the fields and on the range to contribute to the support of the family.

On April 7, 1896 he received first Communion. A few years later, following his mother’s example, he asked to be received into the Franciscan Third Order.

In the hard work of his first twenty-two years with the animals and in the forests and fields, Pietro Antonio cultivated in his heart a growing call to consecrate himself to God. On the advice of his pastor he chose the Capuchin life and on April 221, 1908 he arrived at the novitiate friary in Lovere. There he was invested in the habit of the Capuchin Friars Minor on July 29, 1908 and was given the name Br. Cecilio Maria. On August 2, 1909 he made his religious profession and the next day left Lovere for the friary of Albino, where obedience called him to the assignments of sacristan, refectorian, assistant porter, and infirmarian.

Br. Cecilio Maria’s first tasks in the friary of Milano-Monforte were care for the common spaces, infirmarian, and assistant sacristan. In April 1914 he contracted meningitis and there was fear for his survival. It was on this occasion that he had a deep spiritual experience in which he experienced the benevolent judgment of God in the moment of final judgment. From his diary we know that this experience remained a vivid memory. His healing, as he himself attests, was thanks to the intercession of the Capuchin friar and then Servant of God (today Blessed) Innocent of Berzo, whose cause for beatification was active at the time.

In 1916, during the explosion of the First World War, Br. Cecilio Maria was called to arms. Due to poor health, however, he was sent back to Milan only a few months later. There, on February 2, 1918, he made his solemn profession.

With the war the number of poor grew and the door of the friary became a meeting point. Br. Ceclilio Maria substituted often and willingly for the porter and there met the poor to whom he did not know how to say no. In 1921 he was appointed porter and held this office until 1970. It was in this discreet service that he met Marcello Candia, the Milanese industrialist who left everything and went to Brazil to serve the lepers. With simplicity Candia used to affirm that he learned to serve the poor in the school of Br. Cecilio Maria.

In 1925, when he heard of the death of Venerable Daniele of Samarate, the Capuchin missionary priest in Brazil, himself an apostle as a leper among lepers, Br. Cecilio Maria asked his superiors to go as a missionary to take care of those sick with leprosy, but his request was not granted. Thus he remained in Milan as porter and questor for the poor of the friary.

When the Second World War blew up, Br. Cecilio Maria, despite the bombs, – some struck even the friary of Milano-Monforte – did not move from the door and kept responding to the needs of many people who needed everything, as well as the two cloistered monasteries that depended on his questing to live.

Many times he succeeded in misleading the SS, which kept the friary under surveillance after the arrest and deportation into a concentration camp (June 13, 1944) of Father Giannantonio Agosti da Romallo, who was confessor at the cathedral and was accused of distributing passports to Jews.

At the end of the war the poor in line at the door of the friary was even longer. Br. Cecilio Maria wished for a place to receive these men and women that he saw waiting in an endless line and in all kinds of weather. His prayer was heard in 1959 when Dr. Emilio Grignani offered to build a structure to welcome them on the last bit of land that belonged to the friary. On December 20, 1959 the house which would be called St. Francis Charities, with full services and 150 places to sit, was solemnly dedicated by Cardinal Giovanni Battista Montini, the future Pope Blessed Paul VI. There Br. Cecilio Maria kept serving the poor until 1979, when his health began to decline.

On October 19, 1982, with his condition worsening, Br. Cecilio Maria was transferred to the Capuchin infirmary in Bergamo. Even there, when it was possible, he continued to receive people who sought him out for a word of comfort. Br. Cecilio Maria died peacefully on April10, 1984. After the solemn funeral, celebrated in the church of the friary of Milano-Monforte, he was buried in the Greater Cemetery of Milan. On January 21, 1989 his remains were translated to the church of Milano-Monforte, next to his St. Francis Charities.