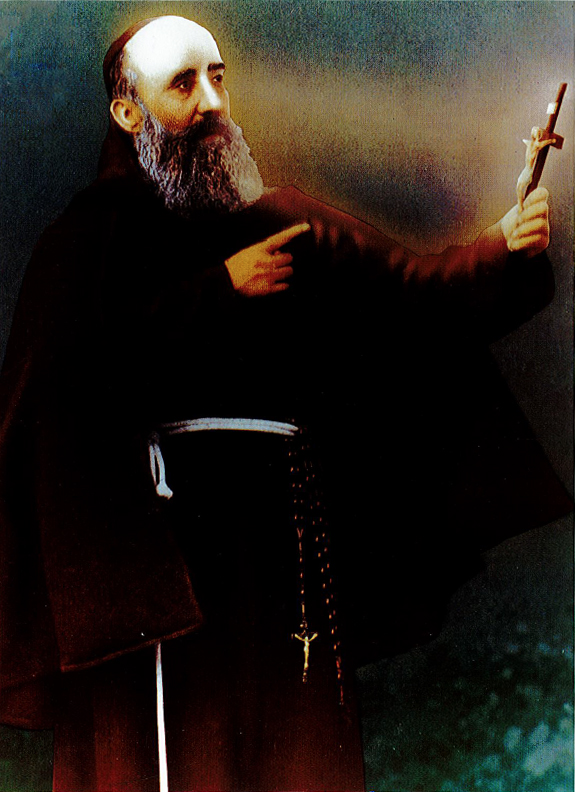 On June 18, 2019, the cardinals and bishops, during the ordinary session of the Congregation for the Causes of Saints, recognized that the Servant of God Angelico (given name: Vincenzo) Limpani (1842-1920) lived in a heroic manner the theological virtues (faith, hope and charity), the cardinal virtues (fortitude, justice, prudence and temperance) and those of his state of consecration (poverty, chastity and obedience).

On July 6, 2019, Our Holy Father Francis authorized the Congregation for the Cause of Saints to promulgate the relevant decree super virtutibus. Now for his beatification, an extraordinary event/ miracle obtained by the intercession of the Venerable Servant of God is necessary.

The Servant of God was born in Caltanissetta (now in Italy) on December 28, 1842. That same day, he was baptized with the name Vincenzo, the fifth son of the large family of Salvatore and his wife, Calogera Raitano.

Vincenzo, inclined toward piety, expressed the desire to become a religious, but his parents did not have the same idea, proposing instead the diocesan priesthood, in order to keep him in the family, because his brother Pietro, who was a diocesan priest himself, had died very young. All were won over by the grace of God, which made Vincenzo’s decision firm and his parents docile, consenting to his choice. At age 19, on October 23, 1861, he entered the Capuchin novitiate of Caccamo, near Palermo, receiving the name of Br. Angelico.

Finishing the year of novitiate, on October 24, 1862, he was admitted to profession and was transferred to Palermo for studies in philosophy and theology. On October 23, 1865, he made profession and on the following December 3 he received his priestly ordination, staying in Palermo to conclude his theological studies.

With the enforcement of the laws for the suppression of religious institutes, the leggi eversive of July 7, 1866 and August 15, 1867, the young priest needed to lay aside the religious habit and leave the friary. He wore thereafter the diocesan priest’s cassock and placed himself under the obedience of the Bishop of Caltanissetta, Giovanni Battista Guttardauro (died 1896). Having obtained the license to preach in 1868, the Servant of God began to occupy himself also with the spiritual assistance of the Third Order Franciscans.

In 1874 the bishop gave him the job of teaching Latin grammar in the diocesan seminary— a ministry to which he remained faithful for 25 years, educating a large group of future priests. Besides already being a teacher in the seminary and formator of young diocesan candidates since 1872, Bishop Guttadauro appointed him rector of a small church, which, although dilapidated and unadorned on the outskirts of Caltanissetta, was dedicated to Christ Crucified Most Holy, and named Signore della Città. The small church soon became the center of an intense spiritual movement. Here, with the help of the Third Order Franciscans, he rekindled devotion to the Holy Cross and promoted the collection of Pane dei poveri (bread for the poor).

With these first initiatives, Fr. Angelico entered deeply into the spiritual life as well as the charitable life of Caltanissetta, but God called him to something more challenging. The city was afflicted by mourning and family tragedies caused by the collapse of the sulphur mines in 1881 in Gessolungo and 1882 in Tumminelli. The victims, exclusively men, left many families in difficulty. To relieve the mourning and the misery, next to the church of Signore della Città, in September 1883, the Servant of God acquired some houses – renovating them from their foundations – to host the families of the sulphur miners who died in the mine.

In the first days of October 1884, twelve orphans, attended by two women who worked with them, picked out a house. Within a year those two would become Sister Giuseppina Ruvolo and Sister Grazia Pedano, who, donning the gray tunic, black veil and the Franciscan cord, consecrated themselves to the Lord, laying the foundations of the institute of the Franciscan Sisters of the Lord of the City; it was October 15, 1885. On October 4, 1899, following the intuition and guided by the counsel of the Servant of God, the congregation received the certificate of approval signed by Most Rev. Ignazio Zuccaro, Bishop of Caltanissetta. On August 30, 1960, the Holy See issued the decree of pontifical approval of the congregation with the name of Franciscan Sisters of the Lord.

The Servant of God was also a promoter of Catholic publishing with the monthly publication of Svegliarino dei Terziari Francescani starting in December 1879. It collected articles from other Franciscan journals of the time with the addition of its own, which were directed to strengthening  fraternal charity among the members of the Third Order and to promoting social action in favor of the poor.

Beyond his charity directed toward orphans, at the same time the Servant of God also took steps to find a new home for the Capuchin brothers. The first stone of the new friary, the third one constructed in Caltanissetta, was set on November 20, 1888. The construction, however, was very slow, so much so that the Capuchin life would only start again on October 4, 1904, when the first friars, with the Servant of God also among them, resumed their community life after the storms of suppression had finally passed.

Since the state of his health was very precarious and due to the practical difficulty of assisting him in the friary, Father Angelico asked the Provincial Minister if he could live with his family. His request was granted and from 1912 until the day of his death on July 9, 1920, the Servant of God, attended by Sisters Damian and Teresa, continued to do apostolic work, to help those who asked him for advice, and to lead with prudence the Institute he founded.

Without means, without fuss, without declarations, he offered his hand and all he possessed to those who suffered or were destitute. For the Servant of God, help for the poor, material or spiritual, had its source in that evangelical pathos which could only lead him to see real needs, implementing a service of charity and putting one’s self in a position as minister of God for the distribution of mercy and the Bread of Life.

Thus charity, flowing and nourished by faith in Christus patiens, Lord and Redeemer, revealed and prayed to in the little church of Christ Crucified Most Holy, Signore della Città, could not but flourish in those daring initiatives that marked the pastoral ministry of the Capuchin priest Angelico Lipani.